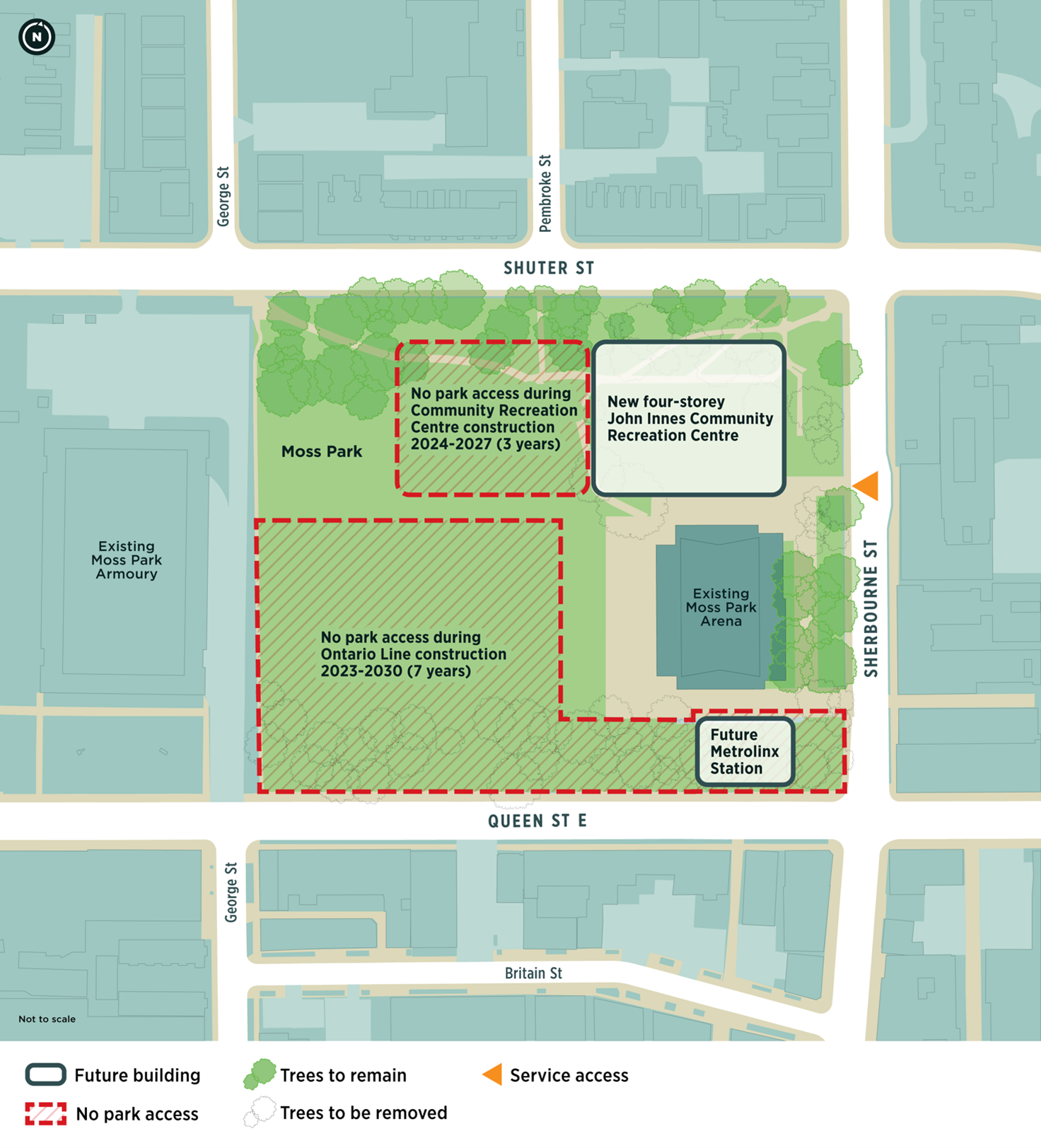 The City of Toronto advocated preserving the trees, but Metrolinx claims “due to the ‘open cut’ method being considered to construct the below-ground portion,” none of the trees can remain. Instead, the city has asked Metrolinx to pay for replanting new trees after construction is completed.

“I’m on the committee for the new community centre design and park redevelopment, and I was shocked that they just casually mentioned that 56 trees were going to be removed,” says resident Diane Devenyi.

On November 13, Devenyi and the Moss Park Coalition, a group of residents and community enthusiasts, organized an “Appreciation for the Trees and Park” event to express their desire to keep the trees. Participants tied a yellow ribbon and a balloon to all 56 trees slated for removal, but by the next morning, no trace of the event was left.

“Two men in a City of Toronto truck came and removed every single ribbon, every single balloon, all traces of them,” Devenyi said.

After a second attempt to restore the ribbons and balloons failed, small notes explaining the decorations was in protest seems to have done the trick. “This time, not everything is being removed,” explained Devenyi.

Devenyi also started the Instagram account Moss Park Love to share photos of dogs and residents enjoying the park and its trees. “We can’t fight [Metrolinx], but if we connect to the fact that we love this park and we love these trees, we might be able to do something,” she says.

Residents are also concerned about park access. Metrolinx says it will begin construction next year, with a scheduled completion date of 2030. On the Eglinton Crosstown LRT, Metrolinx is currently two years behind schedule.

From 2024 to 2027 a new John Innes Community Recreation Centre is to be built at the east end of Moss Park next to the planned station. The two projects are to cost residents access to the majority of the park for up to seven years and the loss of 76 trees.

The city recognizes “the significant loss of the tree canopy” and plans to plant larger trees “to help mitigate the loss of tree canopy along Queen Street.” The city wanted to provide wood from the trees to the recreation centre’s woodshop, but already that intention has been frustrated.

“They’ve already cut down two massive, super-healthy trees,” said Devenyi. “A portion of the wood did go to be milled and made available to the community centre, but some very large pieces of the trees were left basically to rot.” A local woodworker with a chainsaw collected the pieces and took them home for personal use.

Devenyi feels the community is being passed over. “They had a meeting in March, and we weren’t even given the minutes until very recently despite asking for months.”

Metrolinx and the city have proposed relocating the playground to the centre of the park. “Not one parent that I’ve spoken to feels good about that,” says Devenyi, who says it should remain close to the street. Current plans offer no line of sight into the park from Sherbourne Street. The proposed entrance of the Moss Park station is at Queen and Sherbourne, a corner that many consider unsafe.

Devenyi suggests the park is being designed for residents that future developments will bring into the neighbourhood, rather than for current community needs. “They’ve quickly dismissed keeping the baseball diamond, but before the lockdowns, all kinds of people would gather on the bleachers to watch the games.”