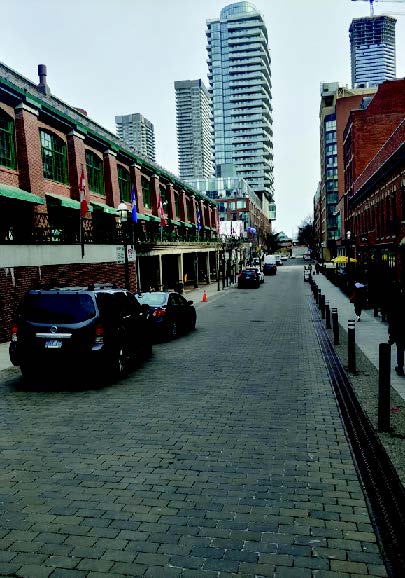 On April 21, the Toronto and East York Community Council voted to close Market Street beside St. Lawrence Market to vehicular traffic from June 1 to September 30. The goal is to encourage pedestrians to enjoy restaurant patios and other outdoor amenities.

In 2013 the block was designed with a flexible and curbless boulevard to benefit restaurants and businesses on the street. Without vehicular traffic, the city hopes to create a safer and more active community in the St. Lawrence Market neighbourhood.

The closure, from Front Street East, south to The Esplanade builds on the “I Heart Market Street” pilot project held last August on two consecutive weekends. Among 2,200 people who responded to an online survey, 92 per cent said they would visit Market Street more frequently without vehicular traffic, and 94 per cent supported a summer closure in 2022. Daily visits to the market were reported by 29 per cent of respondents, and 46 per cent said they visit weekly.

But Simon Miles, a frequent market shopper, criticized the survey’s credibility in a deputation at community council.

“Responders were encouraged to submit multiple responses with the offer of a $100 prize to be determined by draw. That makes a mockery of the survey,” Miles stated. “The most valuable market customer is the one who buys the bulk of their food there, and many of them arrive by car once or twice a week.”

Mariya Pityk, owner of Dnister Ukrainian Store inside the market, said the loss of 10 parking spots on Market Street will discourage large purchases.

“We will lose money because customers will only shop for $3 or $5 [items], and no profit will be made,” Pityk said.

“Whoever decided to do this does not understand business. When they close the street, we lose money.”

“Covid ravaged my business. The last three years I was only open for three months and I just reopened one month ago,” said Marlene Cook, operator of the Sunday Antique Market on the block south of The Esplanade. She represents 60 independent vendors at the antique market and has been running it for 31 years.

Customers who hear of a road closure will not want to come to the downtown core, Cook contended.

Al Smith, executive director of the St. Lawrence Market Neighbourhood Business Improvement Area, says lots of parking spots are still within walking distance of the market. Within 300 metres, around 2800 spots are available, plus 1500 more spots in the next 200 metres and 1800 more in the next 300 metres.

He says innovation is needed to rebuild an economy devastated by Covid-19 in the past two years. The closure will encourage people to stay longer and shop more, Smith said. “We are not closing Market Street but rather opening it for public enjoyment.”

Local councillor Kristyn Wong-Tam said, “The street was purposefully designed and conceived to bring about active animation. It was a street that was going to allow the extension of patios in a friendly and accessible manner”.

A letter from Toronto Centre Cyclists endorsed closing the block to vehicular traffic, which they said will aid local businesses by encouraging patios, music and entertainment.