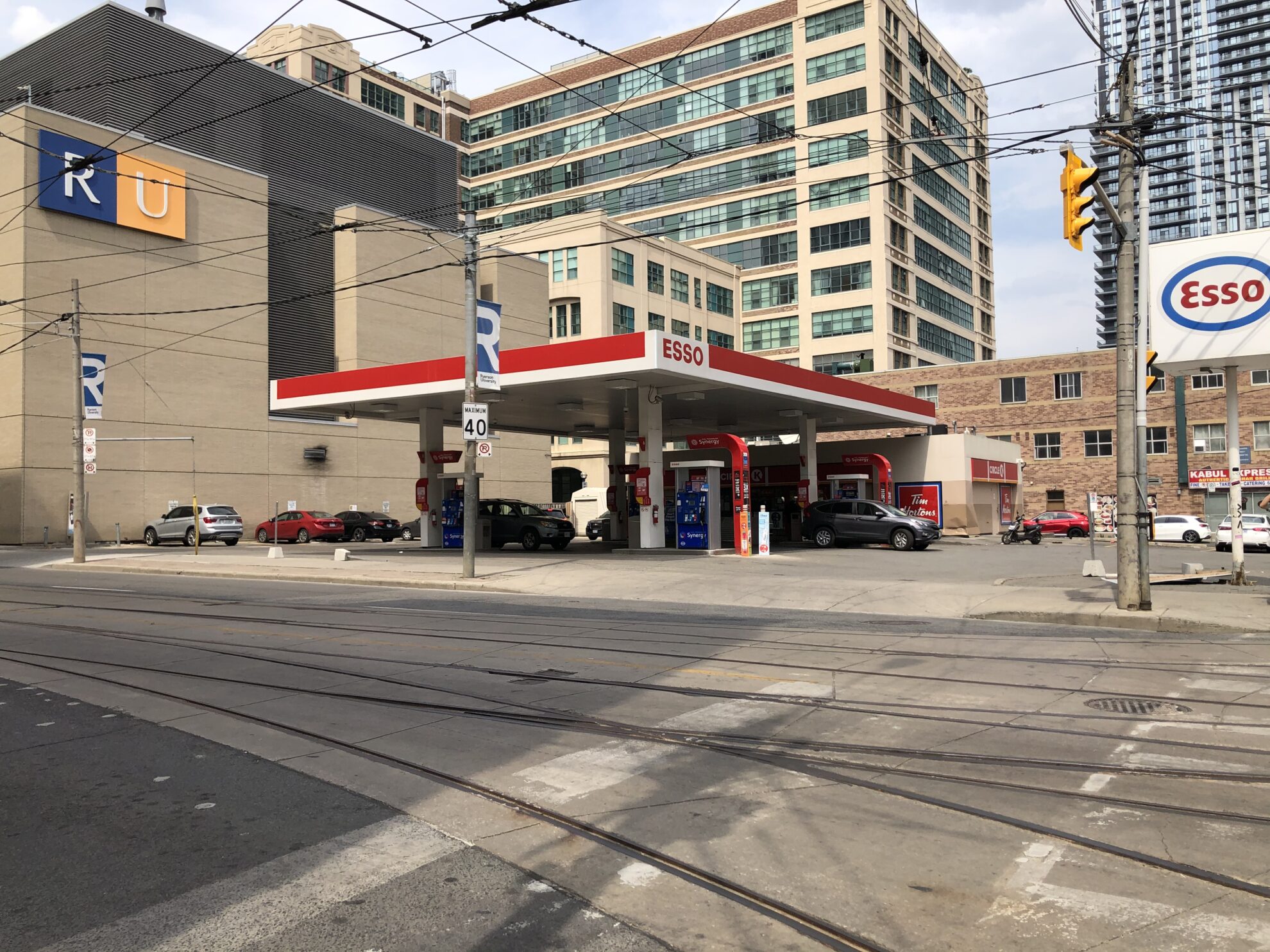 Gas stations are gradually leaving downtown as their land value continues to rise, and as Toronto shifts towards more sustainable transportation.

Proposed condominium developments are replacing some of the last remaining places to fill up in the inner city: Esso stations at Sherborne and Front, and Church and Dundas. For downtown residents who rely on vehicular transportation, gas stations remain at Jarvis and Wellesley (Petro-Canada) and Parliament and Adelaide (Shell).

Most recently, Graywood Developments spent $73 million to build a 53-storey building at 214 Church Street, replacing the Esso and Circle K that it purchased for $4.6 million in 2016, according to Urban Toronto. The Esso is still functioning as the project remains in pre-construction, with no completion date set as of yet.

City Councillor Kristyn Wong-Tam (Toronto Centre) says the trend is to “leave cars parked,” because more people live within walking distance of everything they need, are biking more and are gradually switching to electric vehicles. In 2020, as many workplaces urged employees to work from home during the Covid-19 pandemic, Canada’s retail gasoline sales declined 18 per cent compared with 2019, according to Statistics Canada.

Gas stations like the Church and Dundas Esso no longer fit into Toronto’s urban layout, according to Wong-Tam, because their format is too suburban. The growing number of condo

developments do fit in these urban spaces, which developers are eager to purchase.

Transit projects currently underway are the Ontario Line, which will provide relief to the Line 1 subway (mainly Yonge Street), the Scarborough subway extension to Line 2, and the SmartTrack Stations program for travel into and out of the city, according to the City of Toronto. These projects are still under construction, need further planning or are seeking public consultation, according to status reports by Metrolinx, the provincial transit agency.

Elaine Lewis, a senior manager at Home Depot Canada, lives downtown and drives two to three times a week to her office, taking the Gardiner eastbound onto the Don Valley Parkway. She usually buys gas at Bathurst and Lakeshore once a week.

Lewis is often trying to get to meetings and would rather not “cut it close” by taking transit, she said. As well, given the state of the Covid-19 pandemic, she is hesitant to be on crowded transit.

Toronto’s climate action strategy, TransformTO, aims to reduce greenhouse gas emissions by 80 per cent by 2050, including having all transportation use carbonless energy sources. Vehicles produce more than a third of Toronto’s greenhouse gas emissions, leading City Council to approve its first electric vehicle strategy to “prepare for the global shift towards electric mobility.”

The Ontario Condominium Act of 1998 gives condominium boards the authority to regulate common use of property and choose whether to make modifications like electric outlets available in tenant parking garages. The act is currently under review by the Ministry of Government and Consumer Services to facilitate increasing vehicle charging infrastructure, according to the City of Toronto.