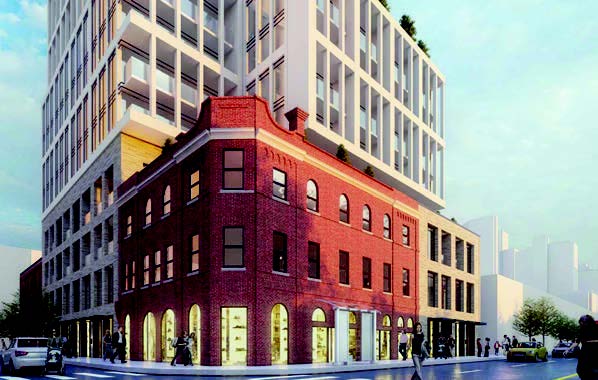 City staff and local residents are calling for revisions to a proposed 31 storey mixed-use condominium on a 19th-century heritage site at the corner of Queen and Sherbourne Streets. The application by Bousfields Inc. in partnership with developer Dash Developments Inc., proposes a tower rising just over 97 metres with 340 condominium units, according to designs by architects IBI Group.

The project, at 229 Queen Street East and 122 Sherbourne Street, would include 23 studio units, 150 of one-bedroom, 132 two-bedroom suites and 35 with three-bedrooms. None are designated affordable. Three levels of underground parking, accessible from Britain Street, would provide 60 vehicle spaces and 34 short-term bicycle parking spots.

At a virtual community meeting April 26, residents lack of consideration for longstanding social challenges in the community. The proposed site is in the heart of the Moss Park neighbourhood and across the street from Metrolinx’s planned Ontario Line subway station.

Moss Park is near several homeless shelters, and the Queen-Dundas area around Sherbourne is home to a concentration of social housing built in the post-war urban renewal decades of the 1960 and 1970s. Some residents opposed the application because of neglect of the community’s needs,
while others tagged it a “profit- grab” by developers.

City Councillor Kristyn Wong-Tam said, “This is obviously a very important corner at Sherbourne and Queen. We are an incredibly resilient community, but at the same time you’ve got some big social challenges.”

The condo tower would displace the Anishnawbe Health Toronto facility on Queen Street and an overdose prevention site on Sherbourne, as well as businesses FAMO Sandwich Creations and 1922 Cannabis. David Huynh, a planning consultant for Bousfi elds, said the company has been in touch with Jason Altenberg, executive director of South Riverdale Community Health Centre, to discuss possible solutions regarding the displacement of
the overdose prevention site including a mobile or co-working space.

Wong-Tam said, “The desperate need for affordable housing in the City” is an unavoidable topic. “Building housing for residents is not just the city’s responsibility but everybody’s responsibility – whether it’s the provincial [or] federal government, or in this case a private market developer.”

Reflecting calls for the developer to be socially responsible, another resident noted that crime, drug use, poverty and homelessness are abundant in the community. “A 31-storey building or bringing new residents to the area will not resolve these social issues.”

Dash Developments plans to preserve only the exterior façades of the existing heritage properties at 229 Queen Street East and 122 Sherbourne Street, incorporating them into the base of the tower.

Wong-Tam acknowledged potential shadow impacts but said the Ontario Line construction “is going to see about 56 trees removed or injured from the park, so we have the chance to redevelop all of the Moss Park campus. That conversation is on its way very shortly.”

“This area is challenged. [The neighbourhood’s] needs are significant. There are significant investments that are coming in, but I hear you. More needs to be done.”