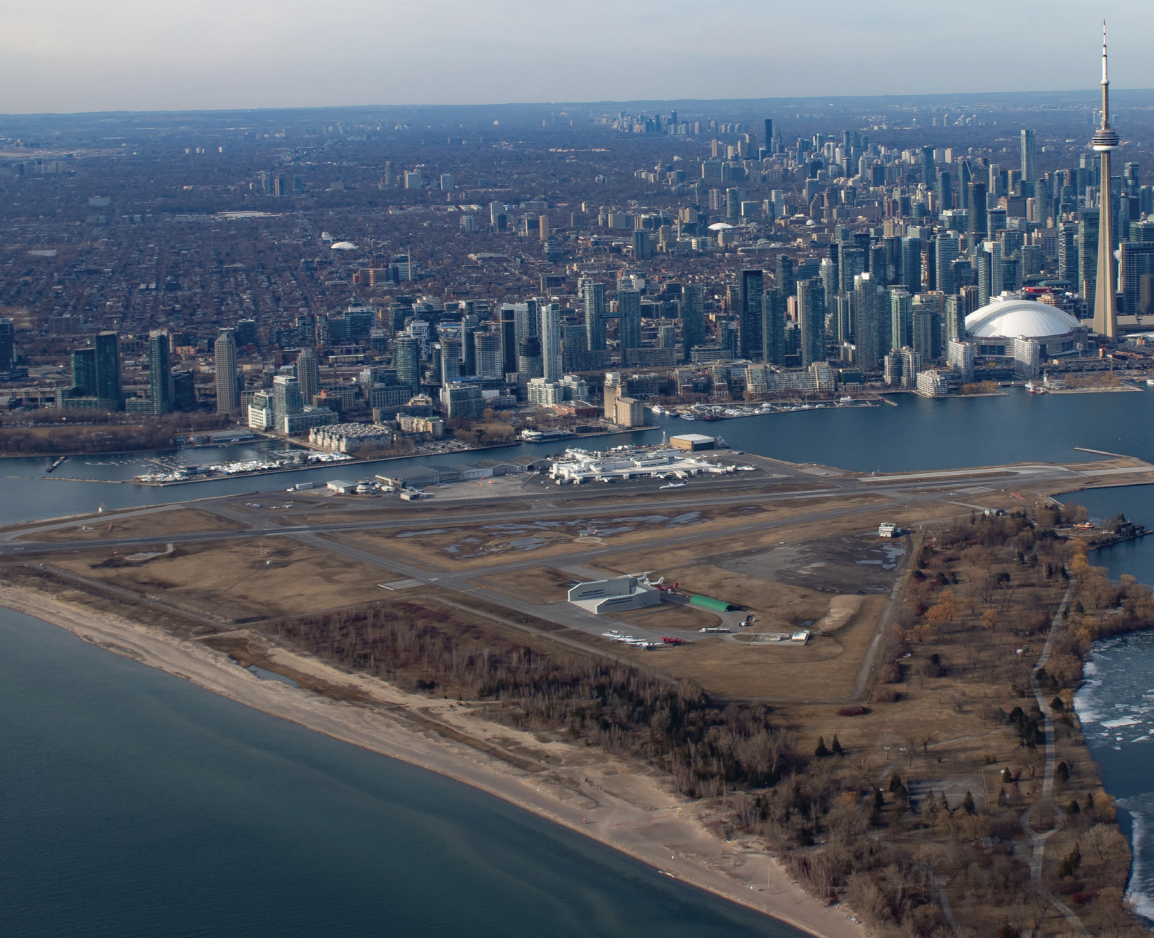 PortsToronto, the government agency that operates the Billy Bishop Toronto City Airport, on March 30 issued a request for interest (RFI) to identify a financial investor for the airport.

PortsToronto says the purpose of this move is to reduce the airport’s overall debt, enhance liquidity, enable infrastructure investment, and ensure the airport’s long-term viability.

In response, Waterfront For All, a group of neighbourhood associations and residents, called for full and open consultations, including looking at alternatives for the site.

“There needs to be a very careful evaluation of all of the options,” said Ed Hore, chair of Waterfront For All. “Should the airport site become a 215-acre park?” a news release asked.

“Everyone knows the downtown area of Toronto needs parks.”

“Developing the island airport lands as a park, now connected to the mainland by a tunnel, would likely be a lot cheaper than building proposed Rail Deck Park, whose cost is estimated by the City at $1.7 billion (the Canadian Taxpayers Federation says the cost will be $3.8 billion).”

For now, the group’s main focus is on the renewal of the Tripartite Agreement that governs the airport’s operations. The agreement was signed in 1983 by the Toronto HarbourCommission (later the Toronto Port Authority and now PortsToronto, with directors appointed by three government levels) the federal Department of Transport, the Government of Ontario and the City of Toronto.

The 50-year agreement has five major conditions, including that flights can only leave between 6:45 a.m. and 11 p.m., barring emergencies, and that no additional runways or runway extensions shall be constructed. According to Community Air, a group that promotes a green waterfront and advocates closure of the island airport, all five major conditions have been violated.

“The Billy Bishop City Centre Airport must close,” says Community Air’s website. “A large industrial use such as this has no place threatening our waterfront and the greatest recreational resource of our city.”

Any investor who plans to continue operating the airport will ask for a longer time frame than the agreement’s current expiry date of 2033, and the financial investor will only be interested in buying the site to run as an airport unless it’s clear the airport will be there for many years to come, Hore says.

“Should there be a lease renewal? That issue is now squarely before us. We have to discuss it as a City.”

In a statement, PortsToronto said it is seeking a financial investor that would “maintain the organization’s commitment to a managed-growth approach to the airport that ensures balance within the community, and executes upon the airport’s recent Master Plan that endeavours to make investments to make Billy Bishop Airport among the cleanest, greenest and quietest airports in the world.”

“It is incumbent upon PortsToronto–as owner and operator of Billy Bishop Airport–to explore options to manage risk and enhance liquidity in a manner that allows PortsToronto to fulfil its mandate, support Toronto’s economy, and ensure that the airport continues to serve as an asset,” said Robert Poirier, chair of PortsToronto.

“This RFI will inform a strategic evaluation of opportunities regarding the airport by effectively extending the existing and successful P3 structure we already have in place with several key concessions at the airport. Importantly, PortsToronto will remain the signatory to the Tripartite Agreement, with the City of Toronto and the federal government, and as such will retain oversight of the airport and maintain control over such areas as slots, safety and environmental sustainability.”

Completed in 1939, the airport is named after a First World War flying ace, and in 2019 was Canada’s ninth busiest airport and the sixth busiest serving the U.S.

According to the operator of Toronto Pearson International Airport, The Greater Toronto Airports Authority, passenger volumes for 2020 fell by 74 per cent from a year earlier.

Like most Canadian airports, Billy Bishop’s runways have been relatively silent since March 2020. The airport’s major operator, Porter Airlines, ceased operations due to the pandemic until May 19.