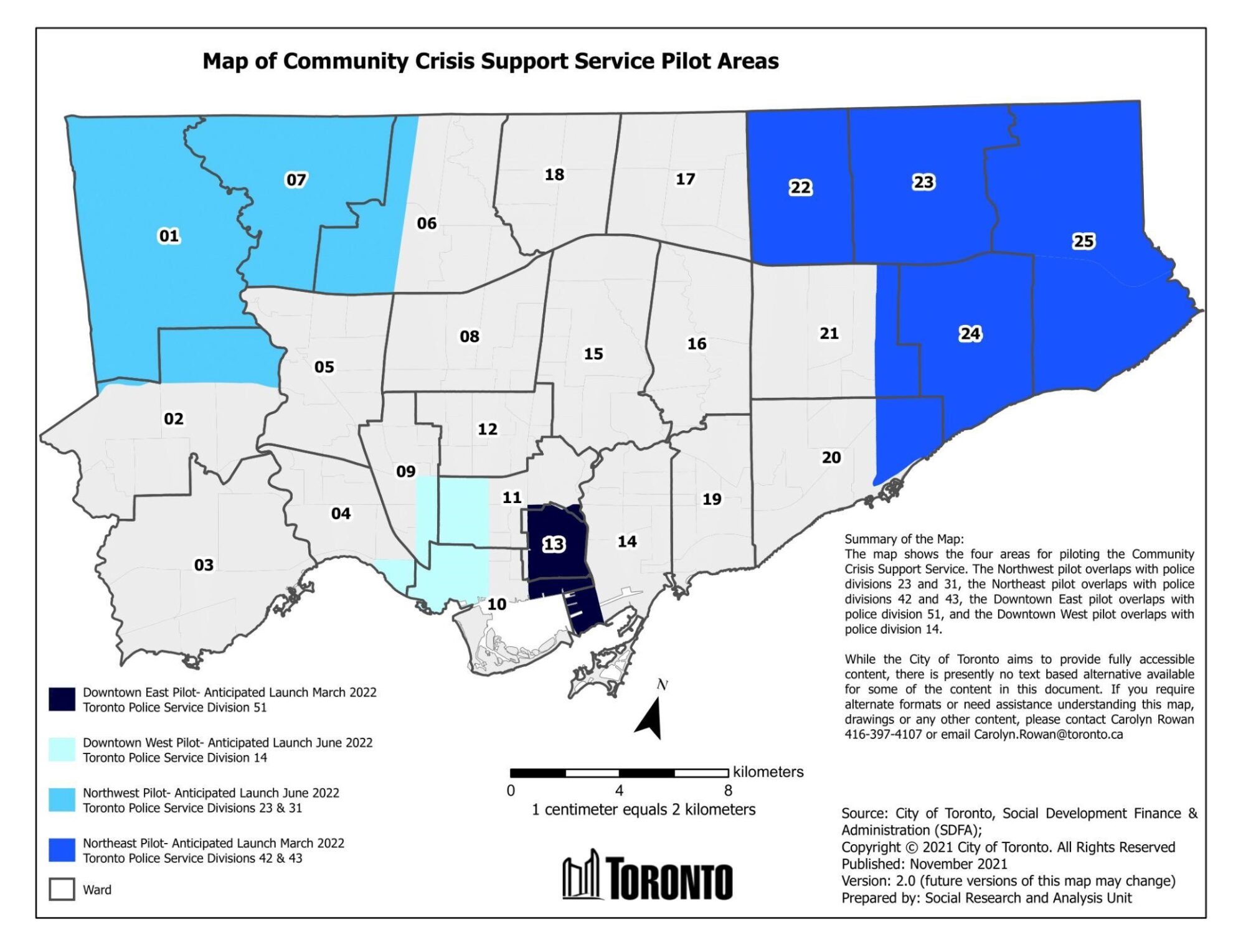 Toronto’s first two civilian-led policing alternatives are scheduled to start in the Downtown East and northeastern Scarborough – police divisions 51 and 42-43 – this month. Similar teams are slated for deployment in June in Downtown West (division 14) and parts of Etobicoke and North York (divisions 23 and 31).

In February, City Council passed the final amendments to the pilot program for the Community Crisis Support Service teams. Toronto residents will still direct their calls to 911, but those fitting designated mental health criteria will be redirected to crisis teams instead of police patrols.

The program was initially unanimously approved by City Council in February 2021, following protests against police brutality that moved through the city during the summer of 2020. Protests were also spurred by the death of Regis Korchinski-Paquet, an Afro-Indigenous woman who died after an interaction with Toronto police responding to a call for a wellness check.

According to data in a report from the City Manager, the Toronto Police Service has witnessed nearly a one-third increase in “person in crisis” calls since 2016. These calls are defined by “person[s] experiencing a temporary breakdown of coping skills”. Several Toronto non-profit organizations sent letters to the City Council advocating for alternatives to policing for their service users.

“We work daily with people who are over-policed, and who have experienced trauma due to aggressive and inappropriate policing,” said Helen Armstrong of CUPE Local 2289, in their letter to the city, about her and peers’ experience working for The Neighbourhood Group, a network of three social service organizations including Central Neighbourhood House in the Downtown East.

Crisis teams will be partnered with centres in their respective areas that already have infrastructures for community mental health support and crisis response. In the Downtown East (mainly Ward 13–Toronto Centre), the operation will partner with the Gerstein Crisis Centre, based near the intersection of Bloor Street East and Church Street.

Among several programs dedicated toward long-term recovery from mental health issues and substance abuse, and enhancing connections to participants’ communities, the Gerstein Centre has a comprehensive crisis support network with in-person mobile teams and a telephone crisis line. With new full-time City of Toronto staff to help implement the initiative city-wide, and additional funds, the centre says it will be able to expand its programs and hire 20 new full-time staff.

Outlined in the program proposal, the teams’ performance and budgets are to be re-evaluated yearly. The program has also been subject to change outside of those yearly evaluations; in June 2021, the initial $1.7 million investment from February of that year, was increased to $2.8 million. City Council approved the increase to “accelerate [the] development of the pilots”, according to a report containing updates to the program, published in Jan. 2022. The report also shows that the program’s budget for 2022 has also been increased from nearly $8 million to nearly $11 million.

In terms of financing the program, City Council consulted with the Toronto Police Service Board to develop a long-term strategy to minimize future costs and allow for the pilot program to expand to other areas. Otherwise, the city’s Chief Financial Officer has been advised to consider this program along with the other priorities for all future city budgets.

Published in 2021, a report titled “Rethinking Community Safety – A Step Forward for Toronto” done by Toronto Neighbourhood Centres, in partnership with several other organizations like Black Lives Matter and the Gerstein Crisis Centre, outlined the need and possibility for policing alternatives. This report and its findings were referenced by multiple letters to City Council in advocating for the initiative.

Sean Meagher, principal researcher for the Neighbourhood Centres report, said about the initiative so far, “We need to figure out how we don’t get stuck. I think it’s really good that we have this pilot and I think they’re terrific. But there’s lots more work to do, and it’s been a long time that we’ve needed to do that work.”