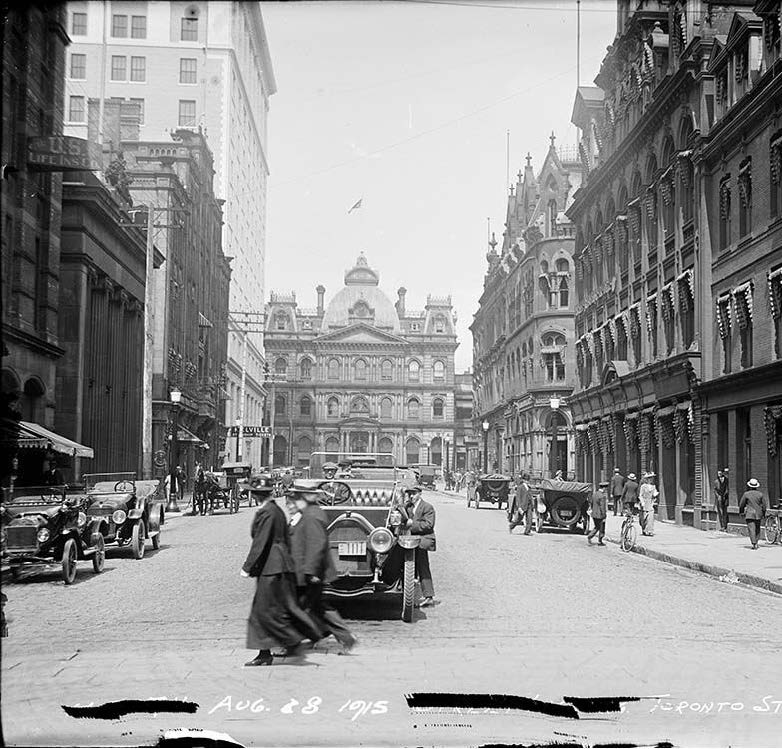 Toronto Street (one block west of Church between King and Adelaide Streets) should be nicknamed the ‘If Only’ street, as in “If Only they had left it alone.”

If only the grandeur that once was had been left standing. If only the 1960s developers hadn’t been in such a rush to build a modernist city.

Toronto Street as an architectural jewel reached its zenith in 1897 during Queen Victoria’s Diamond Jubilee celebrating 60 years on the British throne. A scant 60 years later, its crowning glory, the General Post Office – without question the most elegant building Toronto ever knew –
was demolished in 1958.

Other illustriously adorned buildings like the Masonic Hall, the Toronto Union Block, the Union Loan and Saving Company and the Temple Chambers are just a memory, replaced in some cases by some of the most hideous architecture this city has produced.

Only three buildings from that era are left standing on Toronto Street: the Seventh Post Office at no. 10 (formerly Conrad Black’s headquarters), the Consumers’ Gas Co. building at no. 19 and the Loan and Trust building at no. 25 (southeast corner at Adelaide).

The rest, as stunning as anything Rome at its height ever built, have become
landfill, lying in heaps of ruble waiting for the day they’ll be hauled to the surface. If only.

In 1793 Gov. Simcoe laid out the town of York with its western boundary
being George Street. A few years later Peter Russell, the tyrant who replaced Simcoe, expanded the town’s frontier to present-day Peter Street
(named for himself). On June 10, 1797, Toronto Street came into being.

Back then, the newly constructed Yonge Street didn’t extend to Lake Ontario, but started its journey northward at present-day Queen, then called Lot Street.

Properties on the west side of Toronto Street stretched well past present-day Yonge, preventing further construction below Queen of what one day would be the longest street in the world. Farmers coming into the town of York via Yonge Street would have veered off Yonge and continued to the market down Toronto Street, which then started at Queen and continued south to present-day Wellington Street.

In 1818 the plan was then revamped so Yonge Street could stretch down to the lake. Property owners whose land was blocking construction were compensated by being given land on Toronto Street, which by now had been closed south at King and at its northern end by Adelaide Street.

The result was a street that goes nowhere but had potential for a grand vista. On the northwest corner of King and Toronto once stood the Whittemore Building, erected in 1847. This four- storey commercial block had on its Toronto Street side a shop belonging to C.A. Backus, a newsdealer.

Upon returning from exile in 1849, the rebel William Lyon Mackenzie made this a favourite spot to visit and share stories with other newsmen.

Across the street on the northeast corner stood the jail first built in 1826.
In 1838 two leaders of Mackenzie’s ill-fated rebellion, Samuel Lount and Peter Matthews, who didn’t manage to escape, met their deaths on the gallows where no. 1 Toronto Street now sits.

Thousands of Lount and Matthews supporters gathered on and near the corner, watching in quiet fury as these two patriots were “hanged till
they were dead.”

The jail ended its days as office space; in 1956 it too came crashing down. The site was a two-level parking garage before becoming the condo/office/shop/complex it is today.

The building that housed Mackenzie’s favourite haunt was torn down in 1886 and replaced with the Quebec Bank Building. It still stands on the
northwest corner of Toronto and King.

At the head of Toronto Street on Adelaide stood the General Post Office. A reminder of it today is Toronto Street’s unusually wide sidewalks,
originally laid out to give the post office a grand vista.

Its destruction in 1958marked the beginning of the sleek International Style
of glass-and-steel high-rise construction in Toronto. That put to rest the romantic Renaissance Revival and Second Empire periods of architecture.

At its architectural height,Toronto Street must have been stunning. As I walk along it, I imagine gentlemen leaving their offices on a mild spring evening, tipping their hats to the ladies they pass on their way to their carriages under the fuzzy glow of gas lamps.

Toronto Street seemed rock solid. With such breathtaking imagery, how could it be no more?