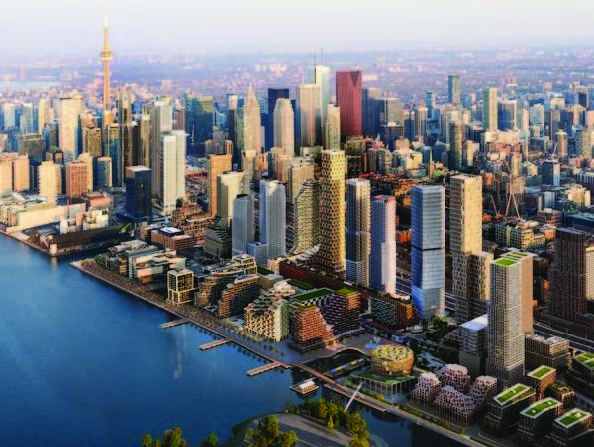 There’s a new sheriff in town. If you ride your trusty steed down to Sherbourne Common and tie up at the hitching post, you’ll see the old stomping ground of Sidewalk Labs.

It’s mostly scrub land now, the tumbleweed bobbing about between abandoned buildings. But it won’t be for long.

A new conglomerate is circling the wagons and promising to “animate the ground plane in a very profound way.”

I don’t know what that means, either – but it sounds exciting.

The new Quayside consortium is a veritable who’s who of international developers, designers and architects. When I say, ‘who’s who’, I mean literally – I don’t know most of them. They include familiar names such as Great Gulf, and also Henning Larsen of New York, Adjaye Associates of London and Two Row Architects, an Indigenous design advisor.

After the Sidewalk Labs debacle, when it was never really clear who was riding the horse, Torontonians can only hope that this time around, some-
one from the city is holding the reins.

The Quayside rhetoric is, like the musical accompaniment to the consortium’s recent YouTube announcement, soaring: “This past two years have… reinforced that the built environment has to really attenuate itself much more closely to the importance of human life with plant life and the natural world,” says David Adjaye of Adjaye Associates.

“(We are) thinking about our architecture in a manner that not only adds to the spaces for humans within cities, but also our relations with the wind and the rain …” enthuses Matthew Hickey of Two Row Architects.
“We hope we are going to be creating a context to weave nature throughout,” says Alison Brooks of Alison Brooks Architects.

Hold that whiskey Mr. Barman, and pass me a Coke. This sounds like the real thing.

But then the design renderings flash up on the screen and – pssst – the fizz is gone. Evidently, Quayside is just another condo development down by
the lake.

The buildings are impressive, for sure – apparently built with a “radical timber frame.” A green roof is up there somewhere. There’s even a “communal forest,” although, look ing at the pictures you are left to wonder what the minimum dimensions of a forest are.

One thing entirely missing from the rendering is water. That’s understandable. In this part of town, the water is hard to find.

It’s not clear why we need so many towering structures down by the lake. Waterfront Toronto’s mandate includes “development of sustainable communities,” so perhaps that gives us a clue. But the same rules don’t seem to apply west of Yonge Street, where condos are set back several metres north of Queens Quay and the waterfront land is open to all.

In the east end, a curtain of concrete rises right along the lake. If you walk along Queen’s Quay from Sugar Beach to the Parliament Basin, the water plays peek-a-boo between the towers. At least you can still see some of it.

The new Quayside development seems to finally draw the blinds.

There’s “a great desire for access to green space,” says Michael Sorenson of Henning Larsen Architects on the video. You have to wonder, then, how the addition of more towers, more private dwellings owned by a lucky few, interspersed with a smattering of shops and the odd school, will improve
waterfront access for the rest of us.

If the folks from Waterfront Toronto walked just a few minutes north they would find a rapidly exploding population.

People are already here. As for the rest of the city, the water is just a Presto tap away. All we need is a destination. All we want is somewhere to tie up and stroll around, and something to do.