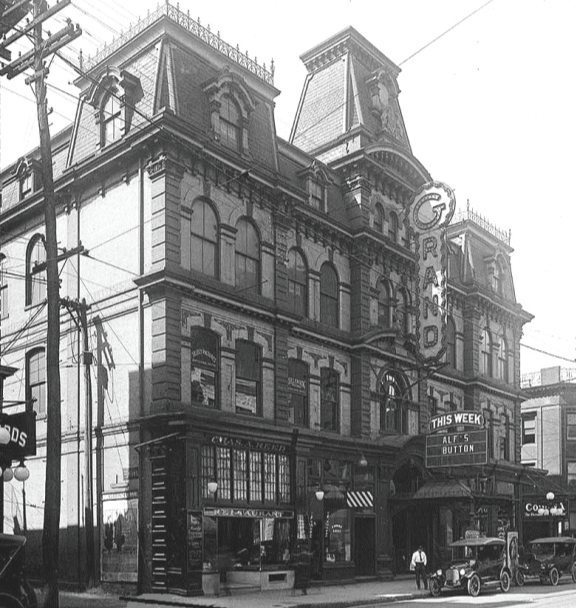 During the 1917 hell that was the Vimy Ridge battle, Merton and a few fellow soldiers formed a theatrical troupe, the Dumbells, to brighten up the horrors for Canadian troops stuck in the trenches of France. The name came from the Third Division’s emblem, a red dumbbell that signified strength.

Upon returning to Canada and after rehearsals in Orillia, the troupe headed to Owen Sound for a successful tryout. The Dumbells opened their new show, “Biff, Bing, Bang,” on October 1, 1919, at London’s Grand Opera House, then owned by theatrical impresario Ambrose Small.

Not knowing if the show would play well to Toronto’s more sophisticated audience, Small booked the Dumbells to play his cavernous 1,700-seat Grand Theatre in the big city. He agreed to run the show for 16 weeks, then a regular vaudeville contract, thinking that the men who suffered through the war might not want to see it a second time.

However, soldiers were actually nostalgic for war songs, skits about the ol’ captain, memories of the terrible food and most importantly the comradeship they formed as bombs, bullets and mustard gas pervaded their daily lives. The scheduled 16-week show packed in audiences. Between return engagements, the Dumbells toured Canada for nine years and grossed a half a million 1920s dollars (about $7.5 million today).

In May of 1921 the Dumbells opened “Biff, Bing, Bang” at the Ambassador Theatre in New York City, becoming the first Canadian musical revue to appear on Broadway.

Toronto’s Grand Theatre was built as the Grand Opera House in 1874 on the south side of Adelaide just west of Yonge. In its day it saw the English-speaking world’s greatest actors, from Sarah Bernhardt to the Barrymores.

The Grand was later recon-figured into a vaudeville and movie house, but is best known for its connection with one the greatest Canadian mysteries: the disappearance of its owner, Ambrose Small.

On the morning of December 2, 1919 – just weeks after signing the Dumbells and after selling his theatre chain including the Grand for $1.7 million – Small walked down Yonge to his bank, deposited the cheque and went back to his theatre office.

At 7 that evening he bought a copy of the New York Times from his regular news-boy at Adelaide and Yonge, walked along Adelaide towards Church Street – and was never seen again. His disappearance was front-page news across Canada.

Was he murdered? Was he kidnapped? Did he run away on his own accord? Was a woman involved? The mystery deepened when it was discovered that he didn’t take any money with him and no one was making ransom demands. His wife, Theresa, offered a $50,000 reward for his return, but to this day it has never been collected.

Theories on his disappearance range from Small having amnesia and leaving the country thinking he was someone else; falling down a construction site (and still buried beneath a downtown building foundation); being kidnapped and accidentally killed; his wife catching him with another woman and having his body burnt in the theatre furnace.

Part of the mystery’s allure was that it happened just as the roaring ‘20s were getting under way. After years of war and then the Spanish flu pandemic, Toronto and the rest of the world were looking for excitement in the decade that roared.

Some Toronto reporters even got in touch with Sir Arthur Conan Doyle of Sherlock Holmes fame. At first Doyle was interested, leading to headlines like “World’s Greatest Detective to Solve Small Case.” But in the end, Doyle didn’t chase the story.

All through the 1920s Toronto police investigated Small’s disappearance, but the case remained unsolved and officially closed in 1960, when he would have been 94 years old.

The Dumbells, after their enormous success in the 1920s, disbanded in 1932 as talking pictures filled the theatres, but over the years they often reunited for charity events. The last surviving Dumbell, Jack Ayes, died in 1977 at the age of 82.

The Grand Theatre suffered neglect and numerous fires, and was torn down in 1927. Today the only hint of its existence is Grand Opera Lane running south off Adelaide just west of Yonge. A Winners store stands on the site of the once magnificent Grand Opera.

To arrange a walking tour of St. Lawrence Market and Old Town Toronto, or to purchase gift certificates for the holidays, email bruce.bell2@sympatico.ca