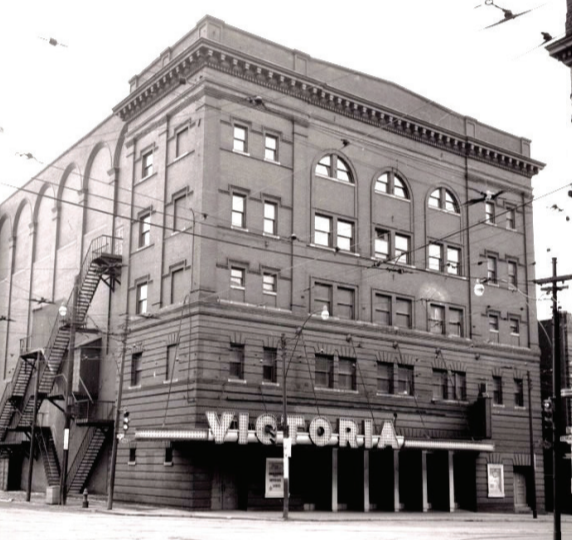 A few years back, my good friend and neighbour the late great actress Billie Mae Richard and I were strolling around and found ourselves walking through a non-descript parking lot on the southeast corner of Victoria and Richmond Streets.

Billie – best known as the voice of “Rudolf the Red Nose Reindeer” in the annual Christmas classic – said that as a young girl in the 1920s she often performed there, as the parking lot was the site of impressive Shea’s Victoria Theatre.

As we meandered through parked cars she pointed out where the entrance once was, the auditorium, the dressing rooms, where the doorman sat and where the large stage once stood.

Opened in 1910, this once magnificent theatre built at the height of vaudeville was one of many lost theatres that dotted Toronto’s downtown core. The Richmond/Queen/Adelaide corridor had so many theatres, large and small, that Billie and her friends nicknamed the area “Toronto’s Broadway.”

Billie was one of the last true vaudevillians. That art form dominated the public entertainment industry during the latter part of the 19th century and first part of the 20th.

Before vaudeville came on the scene, the most popular form of entertainment in Toronto was ‘music hall,’ an evening that included comics singing popular songs of the day, opera interludes, poetry readings and novelty acts.

It all mixed in together for an enjoyable show ending with a rousing chorus of “Rule Britannia” as music hall was deeply ingrained with British colonial roots. There were as many music halls then as there are movie houses today.

However on October 24, 1881 all this changed. Theatre historians regard this date, the opening of Tony Pastor’s 14th Street Theater in New York, as the birth of vaudeville.

The main difference between music hall and vaudeville was that one was very British and the latter very American. Being physically close to the United States, Toronto became a lucrative stop on the vaudeville circuit and enthusiastically embraced this form of American entertainment.

Vaudeville, French for ‘voice of the city’, was what television is today, something for everybody with mass appeal and influence. Even though billed as fun for the whole family vaudeville was a grind industry. Billie Mae told me that by the time she was 6 years old, she and her sister were performing five full-length shows a day starting at 11 a.m.

A typical show was similar to music hall but with one big difference: the headlining act appeared just before intermission. This much-coveted spot determined who the star of the evening was and who therefore received top billing and a big payday.

The second act was much like the first, but the closing performer had faced an audience restless and ready to leave, having seen who they came to see.

Headlining in Toronto was considered the big time on the travelling vaudeville circuit and this city had the theatres to prove it.

One of the first vaudeville houses built in Toronto was the Shea’s Theatre with 1,700 seats, opened in 1899 on the southeast corner of Adelaide and Yonge Streets.

However in December of 1905, fire destroyed the theatre and the owners, the Shea Amusement Company of Buffalo (founded by Michael Shea, a Canadian born in St. Catharines), decided against rebuilding. Instead they constructed the fabulous Shea’s Victoria at Victoria and Richmond.

Shea’s Victoria opened in 1910 with two balconies and approximately 1,800 seats. It was home to some of the biggest vaudeville acts, but also ran full-length plays and musicals.

When vaudeville died with the coming of talking motion pictures in the early 1930s, Shea’s Victoria closed. It sat empty for years, though occasionally opened for charity fundraisers.

During World War II, big shows starring Billie Mae Richards as a young woman were rehearsed at the Victoria before shipping overseas to entertain the troops. Billie performed for King George VI and Queen Elizabeth, later known as the Queen Mother, as well as for U.S. General Dwight Eisenhower and Prime Minister Mackenzie King.

As the war came to an end, Famous Players took over Shea’s Victoria, turned it into a full-time movie house with a 1,896-seat capacity and renamed it the Victoria.

In 1947 the upper balcony was closed due to fire codes, bringing the seating capacity down to 1,260. In 1949 the theatre closed for a major renovation. When it reopened in 1950 it was still one of Toronto’s largest movie houses, but its size was its downfall as it was hard to fill.

In April of 1956 the vast theatre was demolished and remained a parking lot for 60 years. Today the famous location is now a massive condo development.

If you would like a tour of the St. Lawrence Market Old Town tour during the holiday season, contact me at www.brucebelltours.ca. Gift certificates are available.