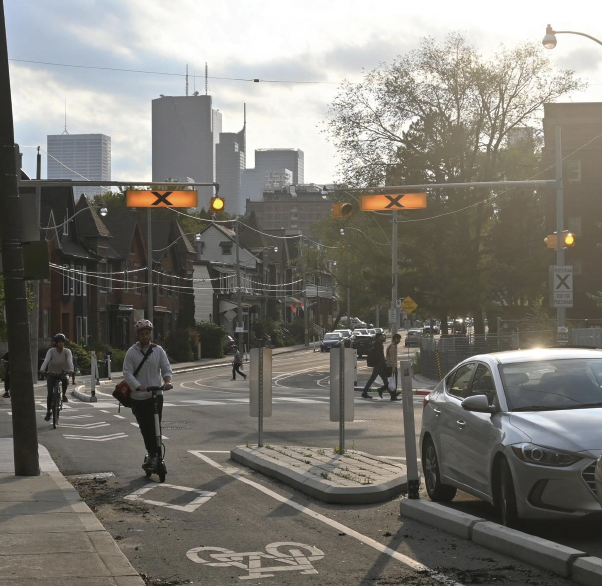 The bike lanes were upgraded to ‘cycle paths’ – physically separated from motor vehicles – to “enhance safety for people walking, cycling and driving,” according to the city. However, drivers entering Shuter from driveways or side streets find their vision impaired by parked cars, making it difficult to see traffic and pedestrians before turning.

“I’ve personally witnessed cars inching forward and getting hit by a car that’s passing,” says Zaheed Alli, a Shuter Street resident. “The nose of the car needs to be into the sidewalk before they can see the roadway, or any cars going by.”

“Just the other day, a gentleman came out in his truck, and he’s looking left because that’s where traffic is coming from,” says Hallowell. “Two kids are in the eastbound bike lane going west, and he doesn’t see them. I thought they were going to die.”

The reconstruction also involved replacing the asphalt surface and road base, which was uneven and pothole-rid-den. The new, smoother road has resulted in cars driving noticeably faster, according to multiple residents. They report that it’s not uncommon to see cars driving at double the 40 km/hr speed limit, particularly at night.

“It’s the wild wild west,” says Hallowell. “You would think that the speed limit on Shuter, east of Parliament, is 70 or 80 kilometres an hour some days.”

“A big problem with all bike lanes in Toronto is the total lack of police enforcement to keep cars from obstructing cyclists,” says Shuter Street resident Bill Eadie.

Some residents have reported an increase in traffic on Shuter Street, which has no streetcars, and no traffic lights between Parliament and River Streets. “People use it as a bypass, whether they’re trying to avoid Queen or Dundas,” says Alli.

Shuter Street residents are calling for action to improve road safety in the neighbourhood. The east end of the street has an elementary school, community centre, sports fields and a park.

The bike lanes dropped on Shuter Street are causing more unsafe conditions than they were meant for. Toronto has been overwhelmed with this idealogy by a bike activist, Barbara Gray, procured from Seattle, Washington by activists parading as City Councillors in downtown Toronto. The Downtown Concerned Citizens Organization (DCCO) representing 41,000 residents/businesses is in strong opposition to this idealogy and supports common sense and her removal. Visit http://www.downtownconcernedcitizens.com and sign the petition.