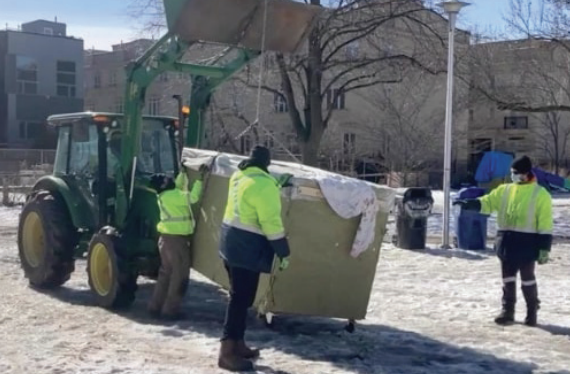 The release states that city staff have spent the last few months “engaged daily with people living outside, listening to, and understanding their needs.” But the Encampment Support Network (ESN) is adamant that the Pathway Inside program is an empty promise based on false statistics.

Two days after the city’s announcement, bylaw enforcement officers in groups as large as 15 entered the four priority parks to post trespass notices on trees and shelters. The notices informed encampment residents of anticipated evictions on April 6 at 8 a.m. Residents who decline the city’s offer to move inside via the Pathway Inside program will be criminalized under the Trespass to Property Act.

In recent months, the city’s Park Ambassadors have conducted “clearings” in which tents and shelters are deemed abandoned or labelled garbage, and removed. The Park Ambassador program is the brainchild of the city councilor for Moss Park (Ward 13), Kristyn WongTam. A city document signed by Wong-Tam in 2017 says the program was established in 2003 “to provide a proactive response to concerns relating to homelessness and safety in Toronto parks”.

ESN representatives say they were not familiar with Park Ambassadors until interacting with them this year while advocating for encampment residents. The volunteers say many Torontonians don’t know what park ambassadors are or what they do, although the city’s 2018 operating budget costed the program at $500,000.

ESN volunteer Ginger Dean says she’s been working recently to understand who is in charge of the park spaces that encampments occupy, “It’s been remarkably difficult to determine,” she says.

When asked directly, the ambassadors often redirect her to a colleague who may claim to not have that information in front of them, and direct her once again. Otherwise, they decline to comment.

According to the city website, “Parks Ambassadors are a responsive, mobile crew whose day-to-day work involves ensuring that parks remain welcoming for passive and recreational use and work to resolve conflicts between patrons of the park system. Parks Ambassadors work to ensure the city’s parks are accessible, equitable and safe places for all.” No information regarding protocol has been published.

In response to an email inquiry, Jaclyn Carlisle, Parks and Rec’s senior communications coordinator, confirmed that the ambassadors visit parks with encampments daily “and engage with people temporarily sleeping in encampments by referring them to programs and services available through Toronto’s Shelter, Support and Housing Administration (SSHA) and other partners, conducting safety and wellness checks and distributing water, socks and other goods as well as tallying the number of structures within an encampment.” Ginger Dean and her colleagues who visit the encampments every day say they rarely witness ambassadors handing out resources. She said they showed up at parks during summer heat waves without water, and only recently have come with socks. “It’s very clear that they use wellness checks as excuses to surveil encampments,” says ESN volunteer Nathan Doucet.

ESN started last May when the pandemic pushed people out of homeless shelters and drew fresh attention to the city’s housing crisis. “All summer and all winter long,” says Dean, “we barely saw Park Ambassadors or Streets to Home [staff]. They turned up every couple of weeks.”

Not until January did ESN notice the Park Ambassadors more. Every day, “they come in sort of anonymously and just take photos of every single structure in the encampment,” says Dean. “They won’t approach the structures, or call out to see if anybody is home.” Dean believes these visits are the daily engagements the city press release refers to.

On Feb. 16, Park Ambassadors removed three tiny homes – insulated wooden shelters built for encampment residents to live in during winter – from Alexandra Park after deeming them abandoned. Dean says she witnessed the removal and called 311 after head Park Ambassador Tory Ford, ignored her questions and walked away. Doucet says Ford is known amongst the community for having slashed the tents of encampment residents in the past.

In audio of the phone call published to ESN’s Instagram account, Dean told Parks Supervisor Grant Drygas that the tiny shelters were not abandoned. She said she knew whose they were, and that some contained the owners’ possessions.

Drygas told Dean that his co-workers have assured him otherwise. He said he was uncertain, but believed that the protocol was a three-day observance period, after which the Park Ambassador team could determine that a structure was abandoned. Drygas also told Dean that he was unsure who authorized that removal, and promised to get back to her.

Dean called Drygas twice in subsequent weeks and reached out to other Park Ambassador staff, but no one returned her calls to clarify the protocol.

According to Parks communications coordinator Jaclyn Carlisle, “structures are only considered abandoned if they remain unoccupied after several visits from city staff or the people using them have voluntarily chosen to accept referrals for safer inside spaces and have confirmed that they’ve collected their belongings. After an encampment is visited at least twice over a period of more than 48 hours without a change in inactive/abandoned status of a structure, the structure identified is deemed abandoned and the area will be cleaned up. This includes the removal of the structure.”

According to ESN volunteers who spend entire days on site, these visits likely occurred at distance, for no more than a couple of hours. While it remains illegal to inhabit, place or build a structure on city property, the U.S. Centers for Disease Control and Prevention recommends allowing people living unsheltered or in encampments to remain there during the Covid-19 pandemic if individual housing options are not available.

Regarding the removal south of Scadding Court on Feb. 26, Carlisle said, “City staff visited this location several times and confirmed that these three structures were inactive and not in use from February 22 to 26, a total of five days.”

Carlisle says Park Ambassadors undergo ongoing training on topics such as occupational health and safety, the city’s human rights and anti-harassment policy, privilege awareness and sensitivity, working with people experiencing homelessness and/or living in poverty, as well as on first aid and narcotic safety.

In a public online event March 1, a coordinated email zap to address concerns to the city, an ESN representative shared his experience with Park Ambassadors in Moss Park. A few hours after the tragic death of a tiny shelter resident, he said, the Park ambassadors entered the space to photograph and remove the structure deemed abandoned. They did not speak to Moss Park residents, bring supplies, or offer mental health support to those grieving the loss of their neighbour.

ESN volunteer Nathan Doucet doesn’t believe the ambassadors or the Pathway Inside program are positioned to help encampment residents. “It’s a mode to clear parks, not a mode to properly support people,” he says.