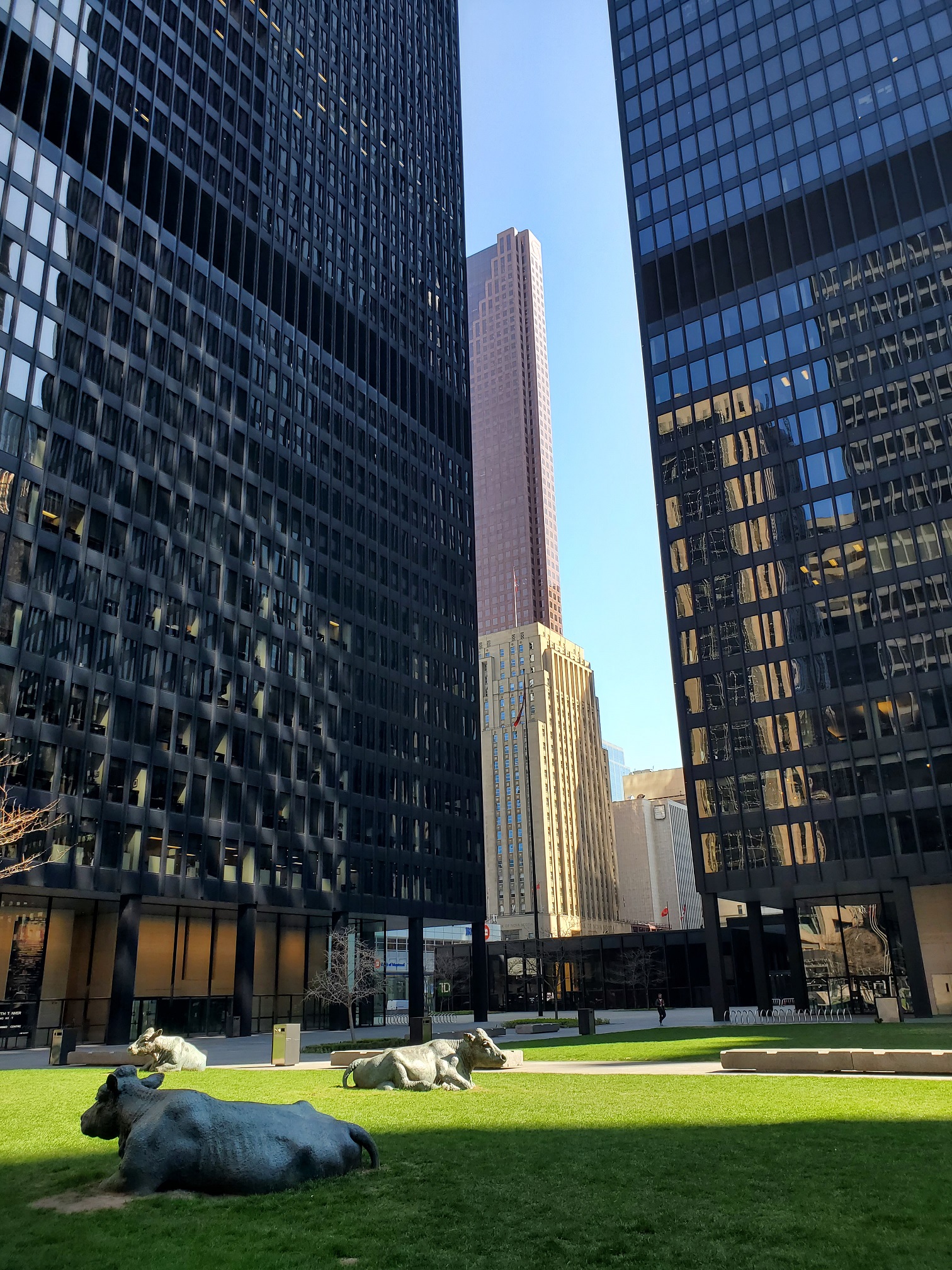 When the Toronto-Dominion Centre opened 54 years ago, our city was a much different place than it is now.

Though it’s considered the last word in modernity, the TD Centre was built in a time when men wore hats to the office, most women office workers were relegated to secretarial pools, and hiring a person of colour among predominantly WASPs (white, Anglo-Saxon Protestants) was seen as ground-breaking.

While the old hiring ways are thankfully no longer with us – and elevator etiquette no longer requires a man to remove his hat but not put out his cigarette – the TD Centre looks pretty much the same as when it opened in 1967.

The first of three structures completed was the largest (known then as the Toronto-Dominion Bank Tower), officially opened while the other two remained unfinished on July 1 to correspond with Canada’s centennial celebrations.

What makes the TD Centre a modern masterpiece of art and design came from the genius who created it, Ludwig Mies van der Rohe, a German born-American architect (1886–1969) – Mies for short (pronounced Mees).

The project was the brainchild of Allen Lambert, CEO of the Toronto-Dominion Bank. Lambert’s sister-inlaw Phyllis – daughter of Seagram’s chairman Samuel Bronfman – recommended Mies as design consultant to the architects, John B. Parkin and Associates and Bregman & Hamann, with Fairview Corporation as the developer.

Before Mies’s arrival, most Toronto skyscrapers were gigantic mountains of stone, detailed with granite gargoyles, marble finials amid massive entryways to make you feel you were entering a Greek temple or an art deco-styled Hollywood palace.

Some modernist architects appreciated early 20th-century architecture, but Mies believed that less was more, and that modern buildings constructed with the best materials but without exterior decoration and stripped down to their bare bones could hold their own as the next wave of architecture.

That’s why I love the TD Centre. Its interior public spaces still have all the original furniture and light switch covers that Mies designed. However, his elevator ashtrays have been removed.

Another lasting component of Mies’s fearless vision is that fresh-cut yellow daisies in clear glass round vases are still placed throughout the main banking hall, with the same flowers up on the 54th floor in the CEO’s office. He wanted his buildings to be organic, with a natural link between customers on the banking floor and the boss man upstairs. As Mies often stated, God is in the detail.

One of the legends about Mies is that just before the TD Centre’s official opening, he went around with a screwdriver lining up all the screws vertically in the 54th-floor boardroom. True or not, it shows how myth can shroud legendary architects as if they were rock stars.

The TD Centre enabled breathtaking vistas both from afar and up close. It became the symbol of the new Toronto: wealthy, powerful and full of promise. Toronto now had the largest, tallest and biggest corporate office space in all Canada, designed by the coolest architect in the world.

However, more than 100 buildings were demolished to create this urban paradise, including one of the most spectacular in the city’s history, the Bank of Toronto building designed in 1912 by the illustrious New York architectural firm Carrère and Hastings – the Mies van der Rohe of its day.

The former King Street facade of the majestic Bank of Toronto can still be seen at Guildwood Park in Scarborough, as well as a scale model displayed in the present TD Centre banking hall.

Even through the TD Centre is colossal, it floats on a human scale with its black-steel-and glass grouping of five towers (two were added to the original three after Mies’s death), all surrounding a plaza named Oscar Peterson Square in 2004. A grass pasture with seven full-sized bronze cows designed by Canadian sculptor Joe Fafard, purposefully or not, marks the location of Toronto’s first theatre, the Royal Lyceum (1848–1883).

The Bank of Toronto was founded in 1855 by George Gooderham; the Dominion Bank was also founded in Toronto in 1869, by James Austin. These two merged in February 1955 to create the Toronto-Dominion Bank.

I love telling my American guests on my historical tours that the ‘T’ in TD Ameritrade stands for Toronto, for TD has 1200 branches in 16 American states.

As massive as the TD Centre is, its footprint is more grass and open plaza than buildings, which makes it an anomaly in the Financial District – all that open space on the most expensive corner in Canada.

Sometimes when I wander through the cow pasture in the calm of an early evening, I can’t help thinking of being out in rugged cattle country. There I am in an immense chasm created by the looming TD Centre, a superb substitute for a breathtaking valley like the final scene in the classic western Shane. With sun reflecting off the golden Royal Bank Plaza tower across the street, it becomes a perfect mix of old Hollywood meets modern Bay Street.