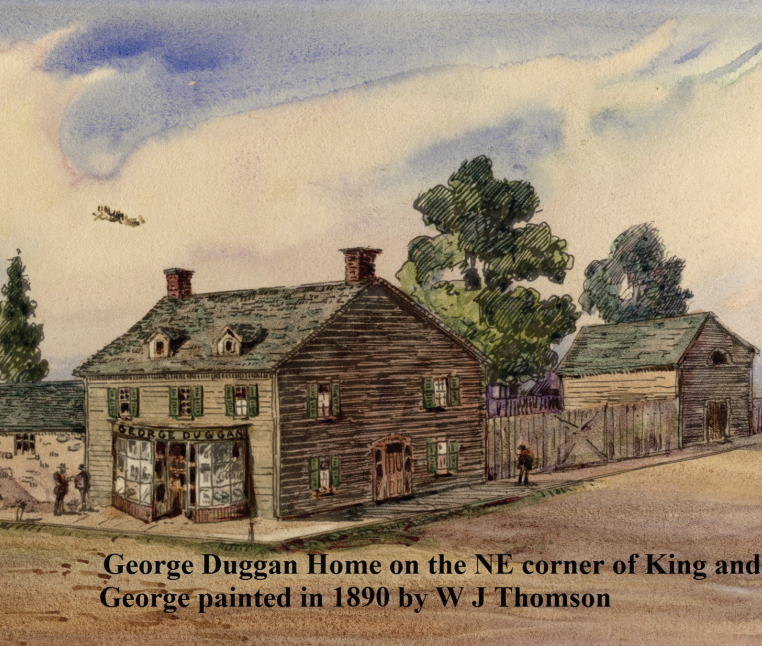 One block east of Jarvis Street, George Street between Front and Adelaide is arguably the oldest street in Toronto.

Footpaths laid down by First Nations people that became streets like Popular Plains Road and Davenport Avenue are older, but George was the first street constructed after the British arrived in the second half of the 18th century.

The British laid out a 10-block area, felling trees west to east from George to Berkeley, to create the Town of York (now Toronto).

One of the first buildings erected on George Street was the home of Rev. George Okill Stuart on the southeast corner of King and George. Arriving about 1800, he was York’s second Anglican minister, the first being a Lt. Smith at Fort York.

Rev. Stuart went on to build the first St. James’ Church at King and Church Streets. But that first church was known as the Episcopal Church in York; the St. James’ name began to appear only in 1827.

From his house, Rev. Stuart set up the first school in York, known as the Home District Grammar School, starting in 1807.

Part log cabin and part clapboard, the house became a general store by 1833, operated by the jovial and much-loved George Duggan. Duggan was also the town’s coroner, while upstairs was the practice of Dr. Thomas Duggan, his brother.

The house later became an Inn and stood until 1879 when the present building went up as the Little York Hotel.

In the early 1800s the four corners of King and George were considered the heart of York and its business district. A March 18, 1822, advertisement in the Gazette newspaper to sell the property next to George Duggan’s famous house termed it, “One of the most eligible lots in the Town of York, and situated on King Street, in the centre of the Town”.

Next to it was Wragg and Co., a procurer of nails and chains, two important industries in the time of log buildings. On the northwest corner of King and George was the store of a Mr. Harris, and on the northeast the merchant E. Lesslie and Sons.

On the present-day northwest corner of George and Adelaide – now The Vu condominium – was the house of Simon Washburn, who was married to the sister of Colonel James FitzGibbon. As a lieutenant, James was the officer that legendary Laura Secord told what she had overheard from American soldiers during the War of 1812.

The colonel, who lived near Queen and Spadina, was a hero not only to the people of York but also to the powers that be back in England. As a reward for outstanding service, in 1850 he was given his own set of rooms in Windsor Castle outside London, then the centre of world authority, where he lived until his death in 1863.

One of four sons of James’ sister was killed when the balcony of the then Town Hall (now the site of St Lawrence Hall on King Street) collapsed; he was one of several people impaled on butcher’s hooks below.

The Washburn house at George and Adelaide, built in 1808 by Henry Hale, had previously been the site of his brickyard, which made some of the bricks that built part of Yonge Street in the late 1700s.

All this history on one corner I think calls for a historic plaque or two. Elegant George Street north of King was the Rosedale of its day.

In 1829 Robert Manners, a cousin of the Duke of Rutland, owned one of the fine Georgian town homes that lined its east side. The townhouse later became a private girl’s school owned by a Mrs. Crombie.

But George Street’s great town homes never got old, as factory cafeterias replaced high tea in front rooms. The once grand east side of the street was torn down in 1874 to build the factory and warehouses of biscuit maker Christie and Brown (later Mr. Christie’s Cookies), and in 1977 the entire block was remodeled into George Brown College.

By the 1950s, the original Town of York – bounded by George, Front, Berkeley and Adelaide – was a forgotten relic of the past. Hardly anybody lived there, and George Street, once a gentile part of town where you’d wear your Sunday best to visit a favorite aunt, became a heavily polluted and highly toxic factory town unto itself.

But George Street survived, and like the former Town of York is coming back to life thanks to people returning to live where it all started.