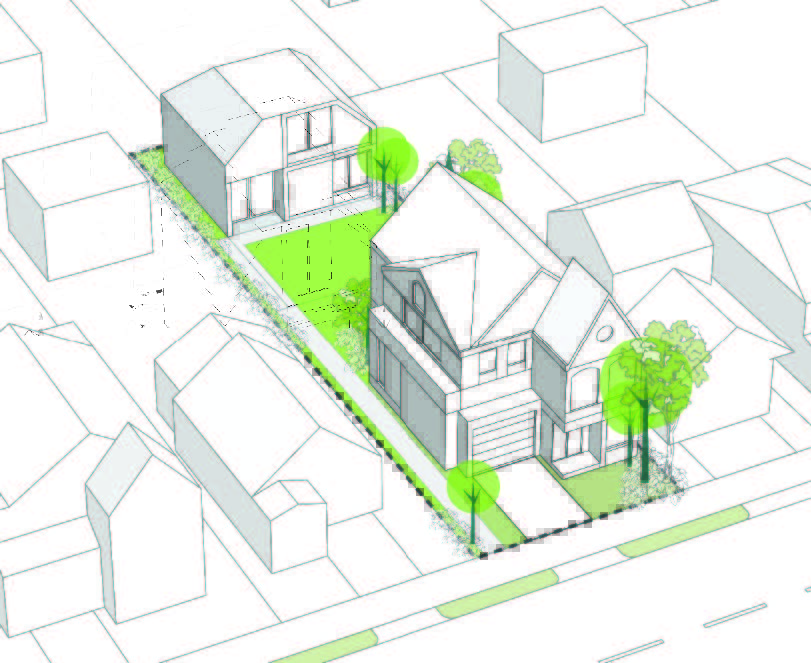 The two back-yard housing options are similar but different. A laneway suite is an ancillary building abutting a laneway, while garden suites are much more varied. These self-contained living accommodations are separate from the main house but can be nearly anywhere on a property.

The plan requires garden suites to be set back at least 1.5 metres from the rear property line on most lots, with a greater setback on larger lots, but setback rules for adjacent houses take precedence. The by-laws also limit heights to 4 metres in suites within 5 metres of the main house, and to 6 metres if 7.5 metres or more. There are further rules about the angular plane of the units to ensure tenants and neighbours get adequate privacy and sun.

Privacy was one of several concerns expressed by community groups and residents in their letters to council ahead of the meeting, primarily from neighbourhoods outside of the downtown core. Peggy Moulder, director of Lakeshore Planning Council Corp., recommended increasing setbacks to three metres for the side yard and seven metres for the rear yard as well as stipulating that the suites could be no more than one storey high.

Rick Green, chair of the Federation of South Toronto Residents’ Associations (FoSTRA), highlighted the lack of “protection against the invasion of neighbours’ privacy as blocks of housing are built at the rear of their property” in the experience of the city of Barrie since their approval of garden suites. Green requested in his letter to council that the vote be deferred to allow the city to learn from Barrie’s experience and to avoid making the same mistakes, including loss of trees, suites that weren’t affordable, and a developer land grab. His request was ultimately a bust as the vote moved forward.

However, research from the UC Berkeley Center for Community Innovation (CCI) favours garden suites as a way to provide affordable housing. After California eased restrictions on accessory dwelling units in 2019, the CCI report found that, only eight per cent of these popular units were short term rentals and the median rental price was less than 30 per cent of household income of the median two person household in the Bay area.

The need for more affordable housing was a primary reason for widespread support of garden suites, as noted in the city’s report and in the emails and letters of support received ahead of the vote by city council.

“I wholeheartedly endorse this proposal,” wrote Dr. Mehrunnisa Ali, an Early Childhood Studies professor at Ryerson University, in her letter to council because in providing affordable housing it would limit urban sprawl and offer opportunities for caregivers to live close to relatives. “Basement apartments, no matter how you renovate them, cannot offer the sunlight, protection from damp, and stairs free access that garden suites can.”

Susan Wankiewicz, executive director of the Landlord’s Self-Help Centre, views the garden suite initiative as “an ideal opportunity to allow additional rental units that could provide much-needed financial relief as a mortgage helper.” She says it will also help seniors to retire in place.

Professor Karen Chapple, director of the School of Cities in the University of Toronto’s Geography & Planning Department, supports garden suites as housing that is affordable by design. “Shared infrastructure and land mean that they cost less to build, and data reveals that homeowners tend to rent them for below market rates.”

Though the initiative is new, Toronto already has many ancillary buildings, most built as coach houses, that have been repurposed, from garages to at-home gyms and even living spaces. Despite this, several groups feared garden suites might change the city.

Others were concerned about green space. The Long Branch Neighbourhood Association asserted that garden suites “will further devastate our tree canopy and … work against the goal of 40 per cent canopy.”

To address these concerns, the city’s Parks, Forestry, and Recreation department can refuse any garden suite permit that involves injuring or destroying a protected tree, which includes any tree over 30 cm in diameter. Applicants will be invited to meet with planning and urban forestry staff to consider changes that would allow a garden suite while protecting the tree.

On lots with parking and vehicle access at the rear lot line, the plan requires a six-metre setback to ensure emergency vehicle access.

Overall, more than 70 per cent of Toronto residents surveyed in the city’s online survey, which was promoted on social media, on Kijiji for apartment hunters, and on the city website for over two months, were in favour of garden suites.