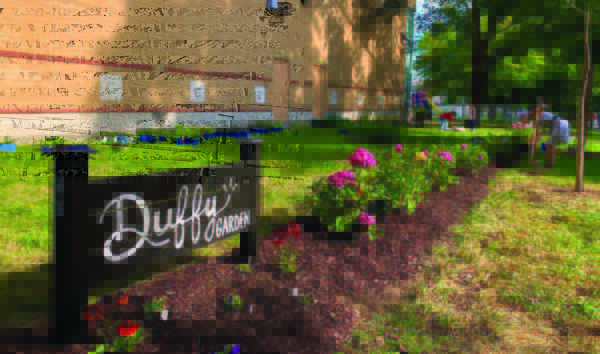 Dufferin Public School has acquired some changes: daisies, tulips and perennials. In 2014, Maggie De Bruyne’s neighbour told her they wanted to adopt and beautify a laneway from Parliament to Berkeley Street; almost 10 years later, she’s trying to bring together a community there.

With a little help from Neighbours Garden Together, a core gardening group that meets during growing season, along with neighbourhood volunteers, De Bruyne decided in 2021 to beautify a patch of ground on Berkeley Street, adjacent Lord Dufferin Public School, laying mulch and planting a vegetable patch.

Known as Duffy Garden, the city has since delivered more than 500 plants, which the neighbourhood group planted into little L-shaped grooves. Kids at the school are also encouraged to help beautify the garden.

“There’s this sense of community when I’m out there,” said De Bruyne, who also started beautification of the Berkeley Street Legacy Garden in 2018. “It’s got so many beautiful benefits, because people stop and say the gardens are amazing.” At the school yard, “the kids that I’ve either had in the vegetable patch or were planting the tulips say, ‘how are the plants doing?’ or ‘how are you? Can I do this next year?’”

“They can get involved in the community. It doesn’t have to be something that they just walked by and said, ‘It’s somebody else’s job.’”

Neighbourhood volunteers help out when they can, and De Bruyne gets a lot of supplies by word of mouth. For example, a contractor gave her wheelbarrows of topsoil after finishing landscaping across the street. “I got them just by being there and saying, let’s look at this differently instead of throwing it into a landfill.”

Keeping up the garden can sometimes be tedious and underappreciated. “Some people take plants or disrespect our signage, destroy them. But the beauty and the appreciation by other people make it all worthwhile.”