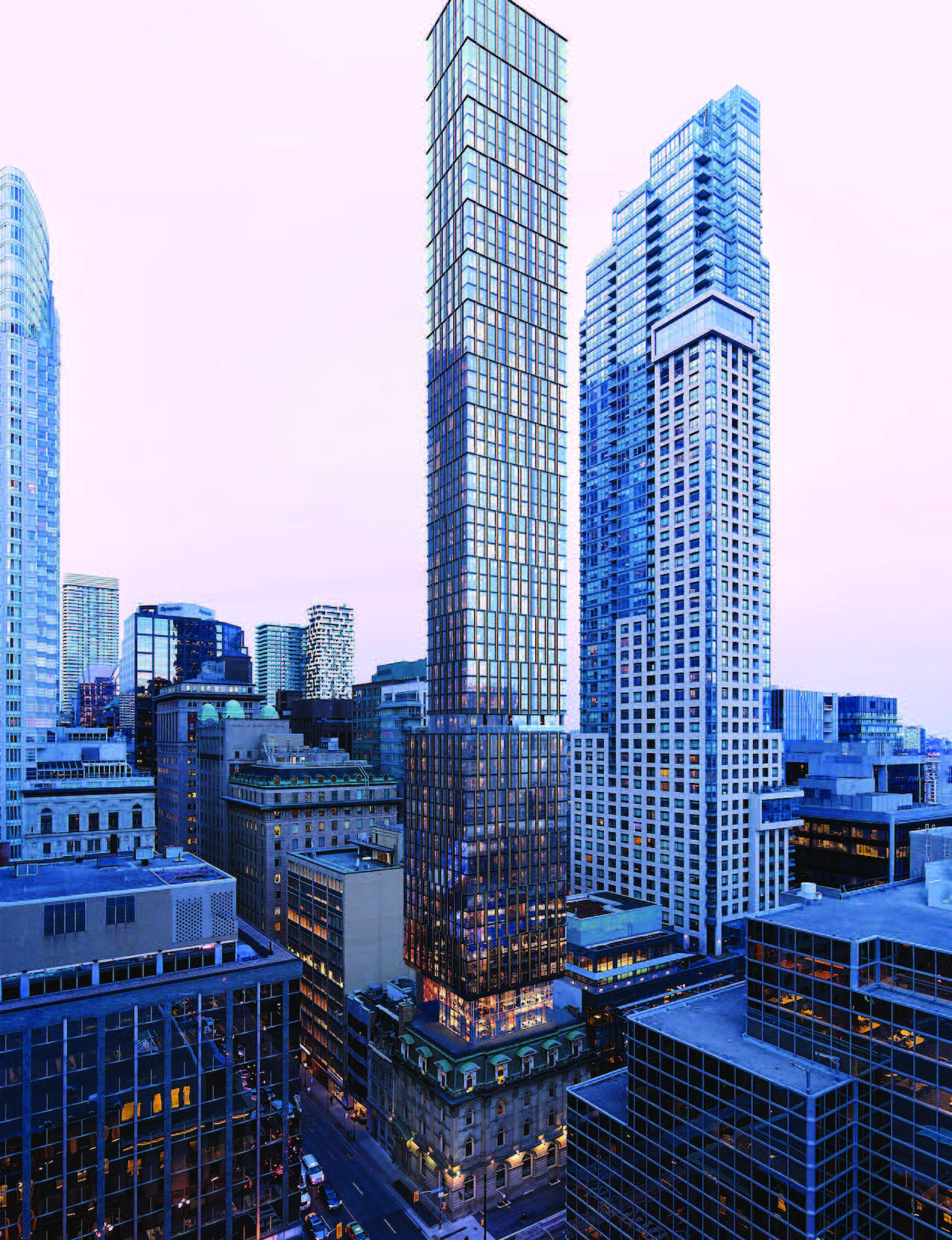 A 60-storey condominium is being proposed for 49–51 Yonge Street at Wellington Street atop 19th-century heritage buildings, but city staff and the local city councillor say revisions are needed. The application is by SmartLiving, the residential sub-brand of SmartCentres REIT.

The Irish Embassy Pub and Grill and other office spaces currently in the prominent heritage buildings will be transformed into the base of the proposed high-rise, according to the plan by SmartLiving’s designers, ‘architects–Alliance’.

The glass tower is to be a mixed-use building with the main lobby at ground level, offices on the second to fifth floors, and 258 residential units of one to three bedrooms. Given its close proximity to TTC lines such as at Union Station, the plan includes no parking spaces but has 284 bicycle parking spots and a loading dock off the private laneway east of the site.

The 1872 former Bank of British North America building at 49 Yonge Street is a designated heritage building, and the 1847 Commercial Travellers’ Association building at 51 Yonge is on the city’s heritage register. Nearby
are other heritage properties including Hotel Victoria at 56 Yonge and Brookfield Place on Bay Street.

SmartLiving proposes to restore the façades of both heritage buildings and says it will ensure no destruction or alteration to any significant
heritage attributes.

Asked by a community member whether the interior heritage would also be preserved, Christopher Caverson of SmartCentres said he couldn’t say without further investigation. To be determined is whether current interior finishes hide original materials such as flooring or painting on columns with scagliola finishes – as was revealed in a 1904 image from Canadian Architect and Builder.

Another community member asked how this project ties in with needed affordable housing.

Wong-Tam said she wanted it well known that the application is “not currently supported in its current form.” Considering community and staff comments, she said, “Hopefully, the applicant will take these comments and
considerations to heart … but if it doesn’t work here on this site and if these changes don’t take place, I don’t think that we can
support this.”

“It’s not like we need another tower unless it’s going to be a contributor to the neighbourhood.”