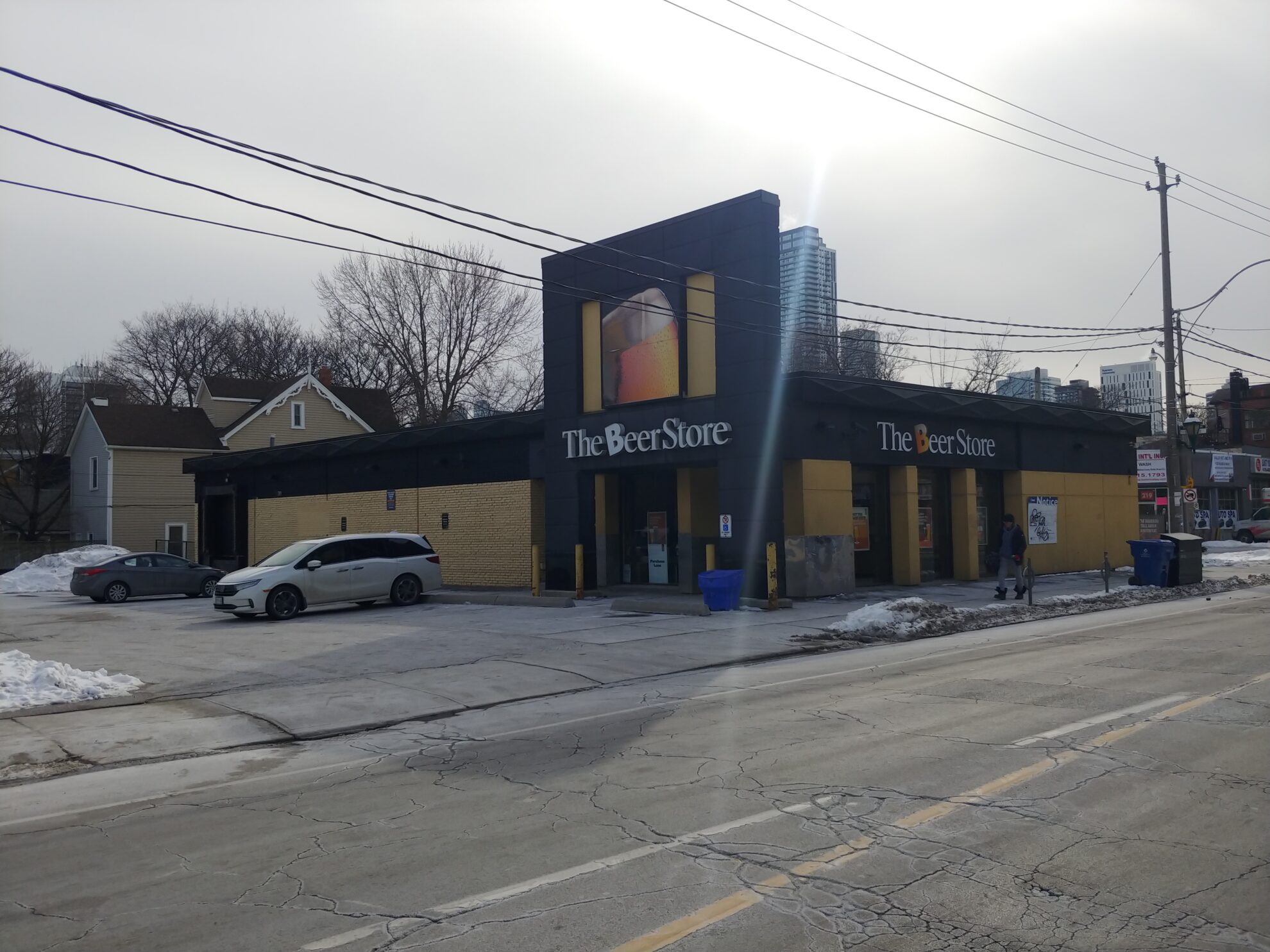 Residents of Cabbagetown South are concerned about plans for an expanded location of The Beer Store at 227 Gerrard Street East. The store will be part of the ground floor commercial spaces in the new condominium development by Stafford Homes.

The condo is known as The Georgian and will sit on the south side of Gerrard Street, bounded by Ontario Street and Seaton Street to the east and west, respectively. The site currently houses a Beer Store location and adjacent parking lot that has long been a concern for residents. In their statement, The Beer Store acknowledges it was “aware of community concerns regarding the local area.”

The site is a popular location for returns and the result is a crowded sidewalk that residents fear will only worsen with the new development. “People wait in line a half hour before it opens, as early as 8:30 AM in the morning, to make returns” says Karen Marren, President of the Cabbagetown South Residents Association (CSRA).

Though the proposed plans meet city regulations for building setbacks from the street, the elimination of the parking lot could result in more foot traffic. Vehicle traffic is another concern for the CSRA. It’s not clear to residents how the plans will address the loss of the parking area that currently allows for large deliveries and collections of empties.

The Beer Store claims that they “participated in numerous community consultations over many years regarding this store” including direct consultations with the CSRA.

Marren, however, refutes this claim. By her account, representation from The Beer Store was absent from the public consultation meeting on February 8, as well as from previous meetings with the community and the Rosewater Capital Group, the previous owner and developer of the site.

“When Rosewater was the developer, the retail was divided up and the biggest space was 4,000 square feet,” says Marren, “and we were always told [they were] unsure if The Beer Store is going to return.” It wasn’t until the first public meeting in early February that she and other residents became aware of the changes. The Beer Store intent on returning and their proposed location would be nearly double the original plan.

The lack of communication between The Beer Store and the local community has been an ongoing issue in this development. “It was not until the on-site meeting on February 23 that a representative from The Beer Store met with us to discuss the proposed plans,” says Marren.

At the on-site meeting, the primary discussion surrounded the size of The Beer Store. Current plans include a 6,964 square foot retail space but residents feel that a Beer Boutique would be more appropriate. Current examples of these boutiques in Liberty Village and the Distillery District are around 3,000 square feet.

According to Marren, this would be the right scale for the neighbourhood. “There are already several locations in our community where beer can be purchased, which negate their argument that a store of this scale is required.”

The goal of the CSRA is to set up a retail space that would be the best fit for the community. “We want the condo. We welcome new neighbours,” says Marren. Her hope is that the new development can add to the community and feels positive about the future of the site. “We’re hopeful that plans evolve and change.”

Construction on this project is expected to commence in the fall of 2022.