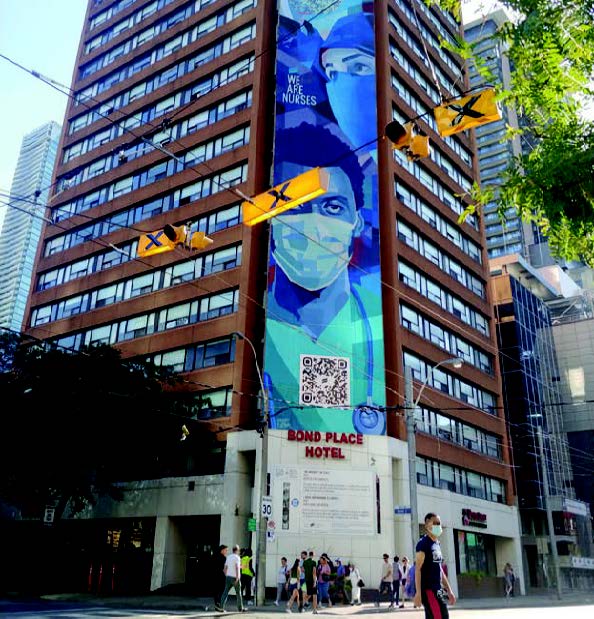 The City of Toronto is purchasing 65 Dundas Street East, known as the Bond Place Hotel, to add affordable housing downtown. The property is currently operated by Dixon Hall, a non-profit community organization, as a homeless shelter.

From this month through the end of 2023, shelter services will gradually be phased out, with clients supported elsewhere during renovations. Permanent residents are expected to begin moving in during spring of 2023.

In an email to the bridge, Abi Bond, executive director of the city’s Housing Secretariat, stated project funding will flow from phase 2 of the federal government’s Rapid Housing Initiative (RHI) – part of almost $440 million RHI money the city has already received to create affordable and supportive housing – and the city’s HousingTO 10-year capital plan.

At the time of writing, the hotel’s purchase price was not disclosed because the transaction hadn’t been completed.

The Bond Place Hotel is owned by the Silver Hotel Group, a private company.

In response to the Covid-19 pandemic and the need for physical distancing in shelters, the city has leased the Bond Place for a homeless shelter since August 2020. The Silver Hotel Group also owns the Novotel at 45 The Esplanade and the Strathcona at 60 York Street, both operating as shelters.

The hotel operations cost approximately $320 million in 2021, according to the Auditor General’s report on Toronto’s emergency shelter system.

The City will continue to partner with Dixon Hall to operate 65 Dundas East, with services including physical and mental health supports, Abi Bond said. When renovated, the permanent housing site will provide about 280 affordable rental homes, including some deeply affordable.

The units will be largely studio and one-bedroom homes with private bathrooms and kitchenettes. Fifteen per cent will be accessible for physically handicapped tenants. Other planned spaces include shared laundry, a dining area, and several communal and programming spaces.

Safety in and around the Bond Place has been an issue since its conversion to a shelter. In June The Hoser, an independent GTA online news outlet, cited examples of sexual assault against female tenants. In the February edition of the bridge, nearby residents and business owners complained about increased drug usage and trafficking as well as harassment by shelter occupants.

To a question about safety, the Housing Secretariat director said the city will coordinate services during the transition to permanent housing with existing supports and stakeholder forums such as the Downtown Yonge Leadership Table and Operations Table. The city will continue to work with stakeholders and members of the community once the facility reopens, Bond said.

The city has created a project

to inform residents and businesses

about progress on the