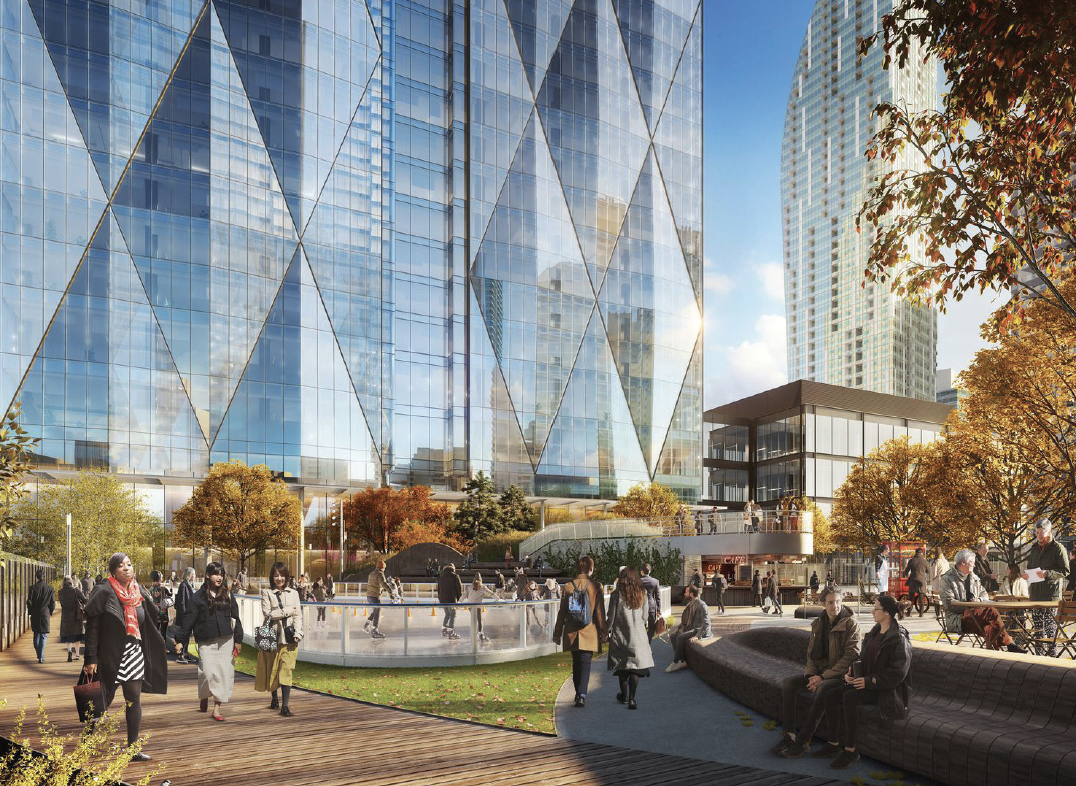 The latest addition to the financial district, a sleek glass-panelled tower at 81 Bay Street across from Union Station, will feature a “mini” rail deck park, analogous on a smaller scale to the project west of Spadina that has now been put in limbo.

An elevated platform over the Go Train tracks will bridge the 49-storey building at 81 Bay to the future 54-storey office tower at 141 Bay. Together they will form the new CIBC Square.

A demonstration of private-sector city building, the one acre-park will join the growing list of Toronto’s privately owned/publicly accessible spaces (POPS). Over the years, the City of Toronto has legitimized POPS as a “key part of the city’s public realm network,” as solutions to much-needed open space in a time of rising property values.

Typically, POPS are established through the Ontario Planning Act’s Section 37 community benefits fund, by which developers finance “public space” such as parks within their project in exchange for increased height and/or density. POPS, often monitored by private security and having restricted hours, can also take the form of plazas, walkways and courtyards. According to the city’s interactive POPS map, Toronto’s downtown has approximately 50 such sites.

The CIBC Square’s developers, Hines and Ivanhoe Cambridge, voluntarily offered the park. It is to serve as a recreational space within the office complex, featuring landscaped slopes and hills, botanical gardens, shade groves, balconies and vista areas.

Corporate programming is also being planned. Dan Biederman, the mastermind behind New York City’s privately managed Byrant Park, has been selected to curate “a seasonal selection of art and music exhibitions, games, literary events, and more.” These events are to “integrate with business meetings, lunch breaks, and impromptu gatherings in what will surely be a focal point of CIBC Square—and downtown Toronto’s—culture,” according to an old post on the CIBC Square website.

But the park-starved public wanting to frolic in this new amenity may walk away disappointed, as architects expect the area will be reserved for events hosted by corporate tenants – “fully wired to act as an extension of the workplace.”

Creating green space in the city’s core has become a considerable challenge. With only 1.8 square metres of park per downtown resident and employee compared with 18 square metres city-wide, municipal officials have become reliant on the private sector to provide open space.

However, such areas acquired through development applications offer few comforts to pedestrians. Largely concrete and thinly interspersed with greenery, they lack suitable seating and refuge from summer heat. Many go unvisited and unused.

While a few breakthrough public parks have been created in recent years, such as Corktown Common in the Canary District, existing spaces have proven inadequate to keep up with population demand. Emphasis on outdoor activity during the Covid-19 pandemic has made Torontonians want more.

CIBC Square Park, while tiny, will likely loom large as a tourist destination and urban oasis in the dense financial district. For their contribution, the private owners will expect a measure of control that could see product placement prioritized over pedestrian leisure.

But with no notable green space projects slated for the downtown area, the city will have little choice but to continue to be at the mercy of developers to provide what was once a public sector good.