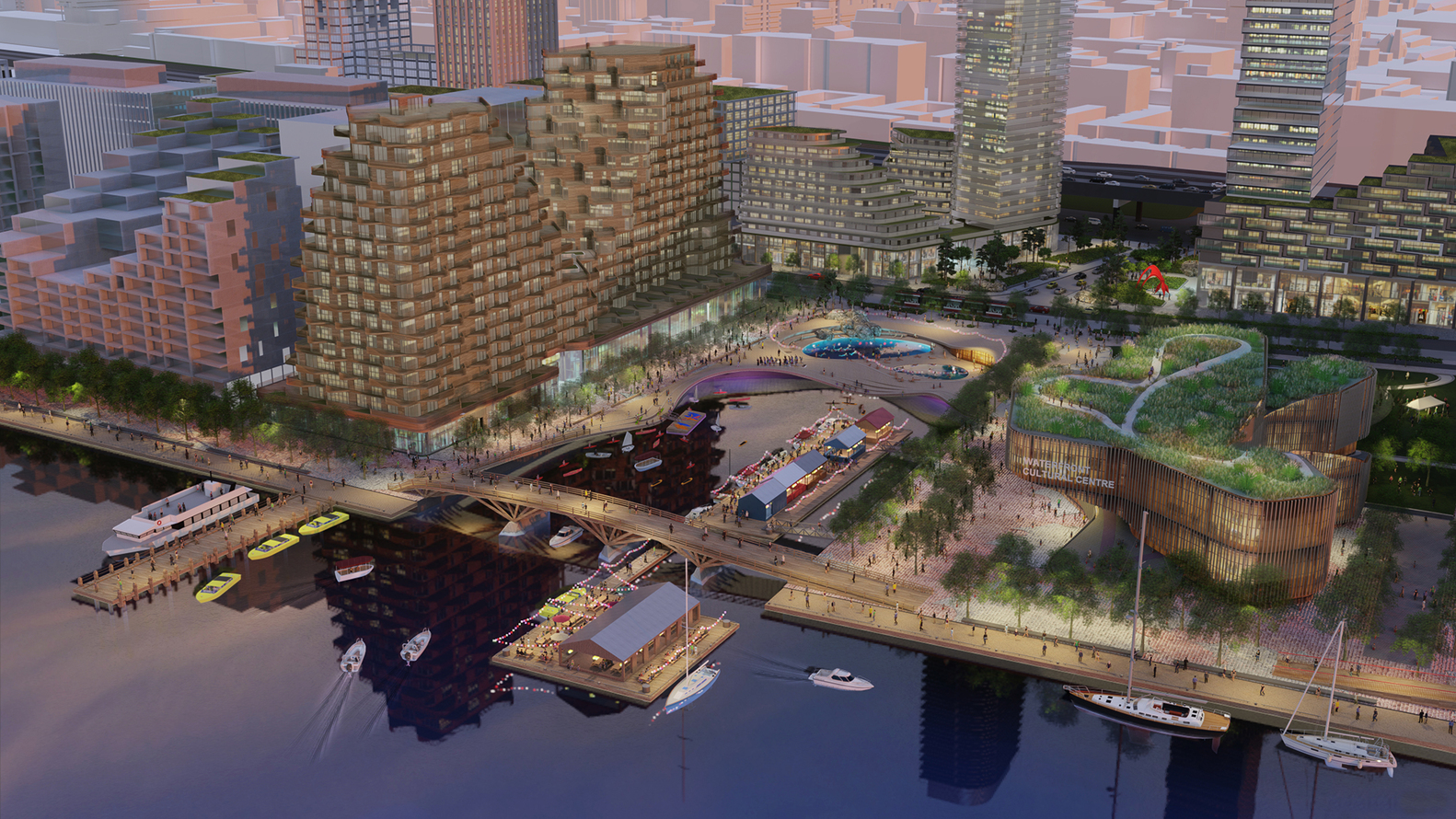 It’s all happening on the waterfront. A July 2021 announcement from Waterfront Toronto brings us yet another step closer to our lakeside utopia: ‘Waterfront Toronto Announces Shortlist of Proponents for the Quayside Development Opportunity’

Apparently, developers will help beautify the L-shaped block of mud and rubble that runs east of Sherbourne Common on the north side of Queens Quay and down to the Parliament Slip.

This was the patch of dirt offered up to Sidewalk Labs. We all know how that turned out.

This project should fare better. A March 2021, Waterfront Toronto ‘Backgrounder’ offers a dreamlike vision for this derelict stretch. Referencing lakeside ‘wavedecks’ on Queen’s Quay West, it says Parliament Slip would “incorporate harbour pools within the WaveDeck. The WaveDeck would be the anchor for a water amphitheatre, floating restaurant, canoe/kayak launch, water transportation hub and floating dock.”

That sounds nice. But the dream is soured a little because Waterfront Toronto also wants to add – you’ve guessed it – more condos.

Why must we build by the lake? Why must a precious few block access for us all?

I am a member of a campaign, Stepping off the Sidewalk, that wants to stop all this lakeside construction and dedicate the waterfront land at the foot of Parliament to park space.

When we reached out to Waterfront Toronto board member and City Councillor Joe Cressy a year ago, we got no response. So we tried again. When he finally returned our calls in June, he said he’d set up a Waterfront Toronto meeting.

We’re still waiting. In the meantime, plans are afoot.

These challenges prompted me to take a closer look at this tri-government agency that’s filling in the shoreline.

So how is it doing? Going for a spin on my bike along the shore last week, I made a few observations:

• There are too many ‘pinch-points’. Consider the muddle at the foot of Bathurst Street by the airport and the unholy mess at the bottom of York Street. Different road users are funnelled full-speed towards one another and forced into too-close contact.

• Huge sections of the path are not even on the water. The shoreline under Waterfront Toronto jurisdiction runs from Dowling Avenue in the west end to Coxwell Avenue in the east. Strolling along, you don’t so much hug the shore as weave around it. Ubiquitous basins are partly to blame: little U-shaped inlets dotting the stretch between Bathurst and Parliament break up your

stroll. Even the wonderful HTO Park is split by a basin.

Why can’t we fill them in?

• Another impediment is the plethora of buildings blocking access to the lake. Toronto loves condos, but do they have to be put right on the shore?

A 2002 Waterfront Toronto design initiative included a proposal by A.J. Diamond of Diamond and Schmitt architects to create “a continuous, public promenade that connects all of the waterside places along the lake.” What a great idea.

Why wasn’t it built? Surely the one thing people want when strolling by the water is to, well – stroll by the water.

I’d love to share my observations and ideas about the waterfront, and heartfelt comments from the thousand supporters of the Stepping off the Sidewalk campaign who want to loll by the lake without a concrete shadow.

But does anyone want to listen?